Macpherson lone Aussie at British Am

Bryden Macpherson is the sole surviving Australian left in the British Amateur following the completion of the second qualification round being held at Hesketh and Hillside Golf Clubs, north of Liverpool.

US based Macpherson fired rounds of 75-70 to finish at two-over-par and in a tie for 25th position, well inside the top 64 and ties who progressed to the championship proper. 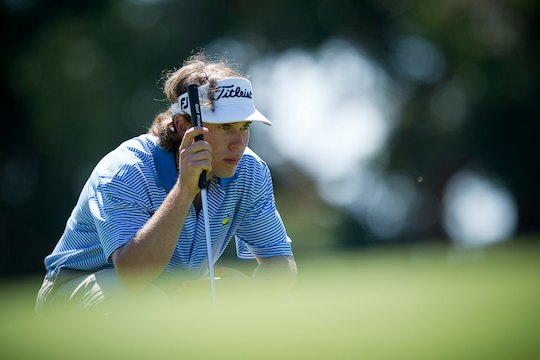 Macpherson will play Englishman Henry Smart, ranked 1203 in the world, and is positioned in the lower half of the draw, along with England’s David Coupland, New Zealand’s Landyn Edwards and France’s Adrien Saddler.

Englishman Gregory Eason has finished at the top of the leader board with a three-under-par 68 at Hesketh Golf Club, adding to yesterday’s 71 at Hillside, for a four-under-par second round total for medalist honours.

This British Amateur for the remaining five Australians represented a tournament of lost opportunities.

Current Australian Amateur champion, Matt Stieger, was the next best performer behind Macpherson with rounds of 77-74 to finish at eight over par and in a tie for 129th position.

Brett Drewitt opened with a solid 72 around Hesketh only to card a 81 around the challenging Hillside layout to eventually finish in a tie for 172nd position.

Ryan McCarthy also finished with Drewitt at ten over par after rounds of 80-73, as did Kalem Richardson with the fellow Tasmanian recording rounds of 77-76.

Chris Wood rounded out the Australian contingency at these championships with rounds of 79-82 to finish well down the field.

For the New Zealanders this British Open is shaping up nicely with the talented Ben Campbell well positioned for the match play segment after finishing the stroke play qualification series in a tie for fourth at one-under-par after rounds of 73-69.

Campbell is a class player and will meet Conor O’Neil in the second round of the championship and should progress from there.

With his confidence growing with each round following a bout of sickness after arriving in the UK a fortnight ago, Campbell is ready to press the field for this championship.

“My game is feeling really good at the moment, my swing is feeling great and short game is feeling solid,” said Campbell who was one of the big movers on day two climbing from a share of 14th to fourth in the qualifying.

“Hillside is an amazing course and I can’t wait to play match play around it. I can’t wait take a few more risks than I did in the stroke play.”

No Kiwi golfer has ever claimed the British Amateur title and while that is the obvious goal, Campbell knows in match play his tournament can end very quickly if he is not on his game or if he comes across a golfer playing quality golf.

“I am focused on taking every match as it comes,” says the world number 10.

I want to commit to every shot and do the best I can. If it is good enough, it will be good enough. The game is feeling solid, so I will just take every shot as it comes. There is still a very long road ahead.”

Campbell finished runner up in the Australian Amateur final in March to Matt Stieger and was then knocked out by Joshua Munn in the second round of the New Zealand Amateur in Christchurch. He is better for the experience.

“I learnt a lot from both of those tournaments,” says Campbell.

“The main thing is to just always make the other person make a putt to win the hole or make him have to hit a good shot. It is important to not give any holes away.”

One of the tournament favourites, England’s Tom Lewis, progressed safely through to the match play segment after rounds of 76-70 to finish in a tie for 36th position.

Lewis will play Garrick Porteous in the second round and should progress from their to set up a possible fourth round encounter with fellow countryman, Andy Sullivan.

Sullivan, who with rounds of 72-17, easily qualified for the match play segment in a tie for 10th position and is off a win at the Scottish Open Amateur a few week’s back with the world number 4 an tenacious competitor in match play.