Australia’s Bryden Macpherson emerged as the surprise winner of the Fragrant Hills International Beijing Open when he outclassed Korea’s Rak Hyun Cho in a three-hole play-off on Sunday.

Macpherson, who started his final round six shots back of the leaders in 10th place, stormed his way to the top of the leaderboard with a flawless seven-under-par 64 at the Fragrant Hills International Golf Club. 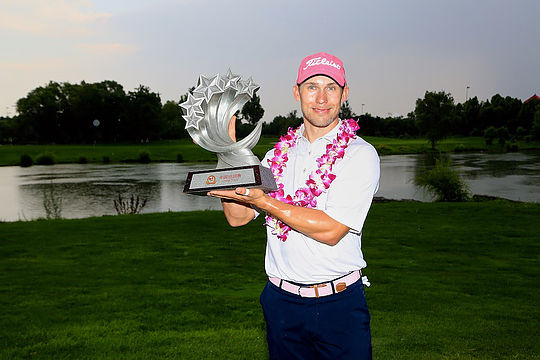 The Australian’s four-day total of 14-under-par 270 was enough to take the ¥1.35 million event into extra-time with Cho, who was on the verge of a back-to-back victory on the China Tour until a bogey on his closing 18th hole denied him an outright win.

“I didn’t think I would have any chance of catching any of the leaders at the start of the day and I guess I was lucky enough to be at the right position at the right time.”

“I haven’t been making many putts during the week but I managed to hole many putts today and played really solid.”

“I told myself to stay patient as you never know what can happen. And then, here we are. I was trying not to think too much of the scores when I played but I thought if I could get to eight or nine-under-par, I may have a chance,” said Macpherson.

Macpherson and Cho carded birdies on the play-off 18th hole twice to extend the contest to the par-three 17.

With the winds picking up on 17, Macpherson hit his tee shot into the bunker.

Like Macpherson, Cho also found the bunker with his tee shot.

While Macpherson managed to knock the ball back onto the green, Cho found further trouble as he failed to hit the ball out of the bunker with his second shot.

Macpherson would subsequently go on to win the Fragrant Hills International Beijing Open with a par as Cho conceded defeat to the Australian.

“At 17, the winds really came up. I made a par which really felt like a birdie instead. It’s the first time I’ve been involved in a three-hole play-off and it was very exciting.

“Unfortunately with a winner, there has to be a loser as well. It’s sad to see these guys couldn’t play as well as they could. I played really nicely all day and I’m really happy with my win today,” said Macpherson.

Australia’s Deysen Lawson, who shared the lead for the first and third round, is meanwhile willing to bid his time as he continues his chase for his breakthrough on the China Tour.

“I need to work on a few things and revaluate where I’m at in my game. It’s all a learning process and hopefully I can get the job done soon,” said Lawson.

“I’ve the skills to compete but I need more exposure and playing opportunities like this to improve. I’ve been working a lot on my game and I hope to show more maturity in my game as I get involved in more competitive environment like this,” said Hak, who created history by becoming the youngest player to make the cut at a European Tour event in 2008 at the age of 14 years.