Victorian Bryden Macpherson has continued his superb form since arriving in China a month ago, claiming the for his second PGA TOUR China Series title in four weeks.

A double-bogey at the 72nd hole failed to dampen Macpherson’s spirits as he shot four consecutive rounds of two-under 68 to win by two strokes from T.K. Kim and third-round leader Sejun Yoon. 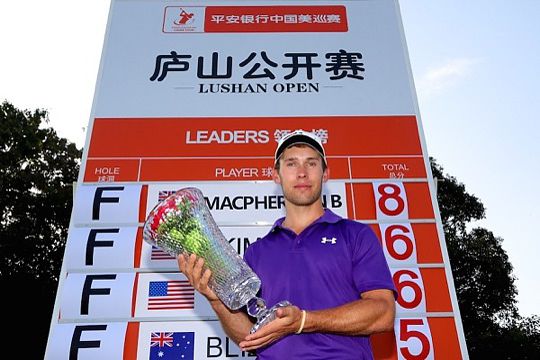 “Today was the first time since the start of the tournament that I felt good with my game.” Macpherson said, “I didn’t feel like I had all of my game early in the tournament, and I managed to still score pretty well, which is important. Today I felt it.”

Macpherson’s run started with a birdie at the 5th and another at the 10th to open up a three-stroke lead as others in contention were faltering. Another birdie at the 11th extended his lead to four which remained unchallenged till the end.

“Ten was a bit of a turning point for me. I struggled with that hole all week visually,” he said. “I hit a really good pitch shot into about three feet and made it.”

“I think I played this well on the Web.com Tour in pieces,” Macpherson said of his poor year in the U.S.

“I played really well on Thursday and Friday on the Web.com Tour, and sometimes Saturday morning. But by the ninth hole on Saturday, I would start to drop off.”

“I played here (PGA TOUR China) last year, and I felt comfortable because I knew how I could play for 72 holes.”

Macpherson’s win lifts him to No.2 on the Order of Merit behind New Zealander Josh Geary, who finished tied for 23rd.

With five events remaining in the season, a third win of the year will be in Macpherson’s sights as the Series heads to Nanshan for this week’s Newport Kingrun Open.