Victorian Bryden Macpherson has set aside a disappointing year on the Web.Com Tour to claim an emphatic three-shot victory at the PGA TOUR China Series’ Cadillac Championship outside Beijing.

Runner-up at this event in 2014, 25-year old Macpherson began the day trailing by two shots but made his charge on the back nine. 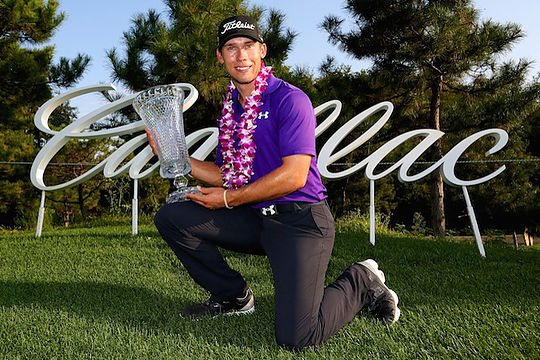 Macpherson’s final round four-under 68, after earlier rounds of 72-63-69 for a 16-under par 272 total, earned him his first professional title after a celebrated amateur and collegiate career in the U.S. which included a win at the 2011 British Amateur.

“I feel really good. I played really nicely for 72 holes,” said Macpherson, who became the third Australian to win on this Tour.

“Every time I started thinking about winning or my score, I would just look around at the mountains and take it in and just enjoy it.”

South Korea’s Byungmin Cho finished runner-up at 13-under 275, while China’s Zihao Chen and South Korea’s Junghwan Lee tied for third place at 12-under.

Australia’s next best were Daniel Pearce who finished tied for 10th at 8-under, Jack Munro was in 19th place at 5-under while Jamie Arnold was a shot further adrift in a tie for 20th.

The PGA TOUR China Series continues this week with the Yulongwan Yulong Open at the Lakeview Yulongwan Golf Club in Kunming.