Bryden Macpherson has won the PGA Tour China Order Of Merit and full exemption for the 2016 Web.com Tour.

Macpherson finished T36 on Sunday at the Capital Airlines Open, just his second result outside the top five since returning to China in September, but it was enough to confirm his card for next year. 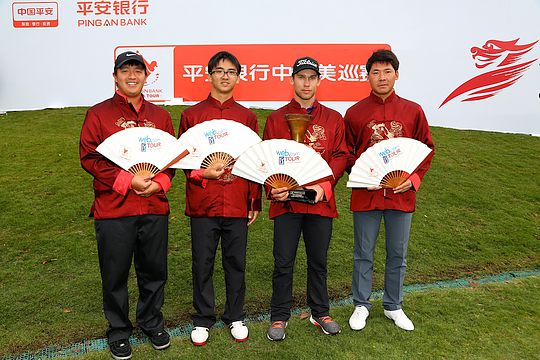 Macpherson and Geary were the only two Australasians to finish in the top five, Rohan Blizard was next best in seventh followed by New Zealand’s Daniel Pearce at 14th with Peter Cooke (23rd) and David Lutterus (24th) the only others inside the top 25.

Securing playing rights in the US for 2016 sets Macpherson up perfectly for his next big move following a stellar amateur career.

Macpherson won the Dunes Medal in 2008 and set two course records in the process, shooting a 64 and then bettering it with a 63. He enrolled at the University of Georgia in 2009 and was named Southeastern Conference Freshman of the Year and was also named to the second All-SEC team.

Since turning professional in 2012, Macpherson secured a tied 4th finish at the 2013 Australian Open and won twice this season on the PGA Tour China at the Cadillac Championship and the Lushan Open.

During 2014, Macpherson had status on three different professional tours (PGA Tour China, PGA Tour of Australasia, OneAsia Tour) before qualifying for the Web.com Tour for the 2015 season.

After failing to retain his Web.com Tour privileges, he returned to PGA Tour China before earning his way back to the Web.com Tour for 2016.