Rickie Fowler won his first professional golf title with a six-stroke victory over US Open champion Rory McIlroy in the Korea Open in Cheonan yesterday.

One of golf’s most exciting young prospects, Fowler finished at 16-under-par with world number three McIlroy closing with a stellar round of seven-under 64, ahead of South Korea’s Kim Meen-whee and compatriot Y.E.Yang, third and fourth respectively. 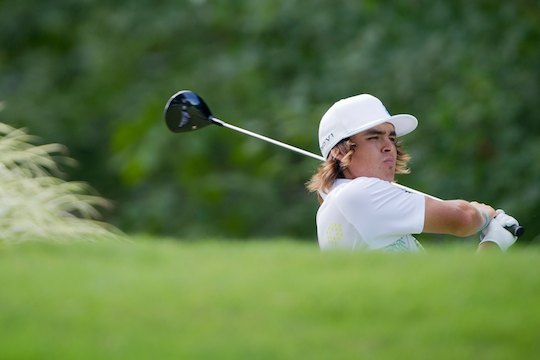 Often billed as ‘the new Rory’, Fowler followed up on his course record eight-under 63 at Woo Jeong Hills on Saturday with a cool 68 final round.

“I played well early on in the final round and then I was comfortable over the last few holes. Overall, I enjoyed the whole week.”

Fowler never slipped from the top of the leaderboard over the four days and said his consistency was the main factor behind his first title.

“I’m happy with the way I have played on the PGA Tour, but I have never shot low enough to win,” he added.

“This week I played well for four rounds which I have not been able to do in the past.”

In little more than two years as a professional, Fowler has appeared in Tiger Woods’ video game, a feature-length film and a music video. A crowd favourite that stands out come Sunday in his Oklahoma State orange colours, the victory on the OneAsia’s circuit is important for Fowler in a number of ways.

The Korea Open wasn’t the strongest tournament professional tournament that Fowler has entered and he needs to win on the PGA Tour to appease his critics. But the fact that Fowler so easily defeated McIlroy on Sunday adds something to his accomplishment.

At just 22, Fowler is already firmly established in the world’s top 50 and has earned more than US$2 million in each of his first two PGA Tour seasons. His unique style, openness to fans and, of course, his immense talent, have quickly made him one of the PGA Tour’s most popular players.

It’s a credit to Fowler that he continues to focus upon the positives, despite not being given a Captain’s pick for the President’s Cup next month in Melbourne, which certainly would have been a body blow for him.

Winning a title on the PGA Tour and a place in the Ryder Cup team would top his agenda for next year, he said.

“I am looking forward to some time off and then I can look at everything and set some goals for next year,” says Fowler.

“I will play mainly on the PGA Tour next year and I would like to get my first win there, and this win will definitely help me achieve that.”

“I also haven’t made the Tour Championship in the last two years, so that is another goal for next year. But the biggest goal is to make sure I make the Ryder Cup team.”

Fowler has had several chances to win his first PGA Tour event. He was tied for the 54-hole lead at this year’s AT&T National and also contended in the final round of the Open Championship.

Barely two months into his professional career back in 2009, Fowler had already banked over US$500,000 in prize money. The former world number one amateur at the time came to life at the Justin Timberlake Shriners Open, firing four rounds in the 60’s to finish in a tie for 7th.

The following tournament at the 2009 Frys.com Open in Scottsdale, Arizona, Fowler again turned heads after losing to Troy Matteson in a three-way playoff.

The win in Korea further confirms Fowler’s rightful place as one of the game’s most promising players. McIlroy came roaring home with the day’s low round, yet the pressure didn’t phase Fowler.

Fowler got the “maiden Tour win” monkey off his back and with a world ranking of 36 and steadily climbing, you cannot help but think it will be the first of many.