Hall, who shot 12-under for 54 holes, won for the second time as a professional with her previous victory coming at the 2018 Women’s British Open at Royal Lytham. Fourteen players finished within four shots of first place, including defending champion Australia’s Hannah Green. 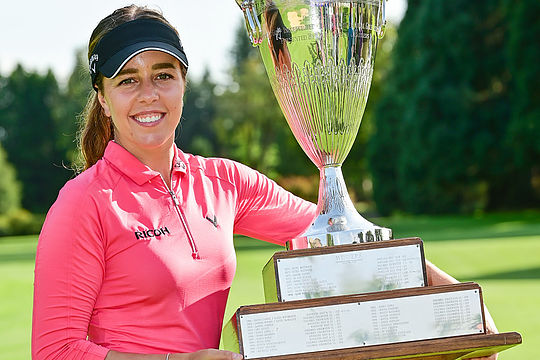 Green held a share of the lead with six holes to play before a string of four bogeys ended her title defence.

Hall, who began the final round four strokes behind leader Mel Reid, played near perfect golf after a bogey on the 3rd to then reel off six birdies in eight holes to move up the leaderboard and then proceeded nail a string of pars.

“I was quite nervous the last six or seven holes, so it was a buildup of emotions,” said Hall.

What’s In The Bag: Georgia Hall

Hall missed a par putt on the 18th for the win in regulation but was able to hold her composure to beat Buhai on the second hole of their playoff for her first LPGA Tour title in the United States.

“I won the British and I just wanted to win again really badly, especially in America,” said Hall. “I always knew it would maybe be harder, so for me to win it’s a relief that I’ve won in America and I can bring that confidence on to the next event.”

At 11-under, one stroke out of the playoff, were Moriya Jutanugarn of Thailand and Yealimi Noh from California.

At 10-under were England’s Mel Reid, Rubynn Ree, Mariah Stackhouse and Cheyenne Knight of the United States along with Caroline Masson of Germany, Jasmine Suwannapura of Thailand and Hall of Famer Inbee Park of South Korea.

Aussies Minjee Lee and Sarah Kemp finished in a share of 42nd and 51st respectively.

After a week off, the LPGA Tour returns Oct. 1-4 with the ShopRite Classic in New Jersey followed Oct. 8-11 by the next major, the KPMG Women’s PGA Championship in Philadelphia.