Starting Thursday evening the best golfers in the world are teeing off at Chambers Bay to see who will take home the trophy for the second major of the year at the US Open.

Chambers Bay, the site of the 2010 US Amateur, is the controversial host venue for the 115th US Open. The layout, which looks more like a links course or the Ocean Course at Kiawah Island than a traditional US Open venue such as Olympic Club or Merion, will demand length off the tee, high shots and creativity around the greens. 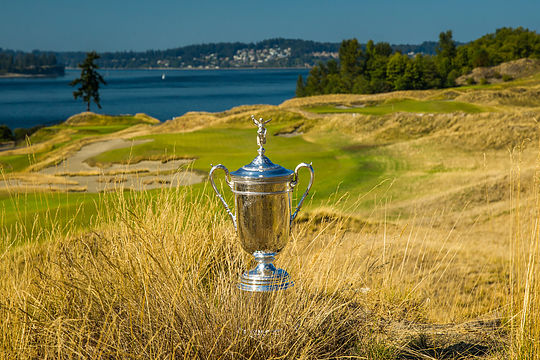 Players will also have plenty of options off the tee with wide fairways and a drivable par 4. But just because Chambers Bay won’t play like a normal US Open doesn’t mean it won’t punish the field.

The scoring average was 79.25 on the Open course in the two-stroke-play rounds for the 2010 Amateur, when Chambers Bay was a par 71. It’ll be a par 70 for the Open. A number of the game’s brightest stars back then – Brooks Koepka (81), Russell Henley (82) and Jordan Spieth (83) – failed to qualify for match play.

Many commentators are reluctant to predict a winner, but all agree that being long off the tee, having a high ball flight, and possessing an imaginative short game will be an advantage.

Mickelson again begins his quest to complete a career Grand Slam with three Masters titles, one British Open and one US PGA Championship already in the bag. The British Open victory at Muirfield in 2013 proves he can compete against the elements.

Mickelson turns 45 today – the oldest US Open winner is Hale Irwin at 45 years and 15 days in 1990 – yet Mickelson’s length and creativity will allow him to once again put himself in position to take the one major he can’t seem to finish off.

World number one Rory McIlroy has been paired with defending champion Martin Kaymer of Germany for the first two rounds. McIlroy won the title in 2011 and is the reigning PGA Championship and Open Champion.

Stenson appears to be fully recovered from a lengthy bout with the flu that slowed him after a torrid start to his season. And, in his past seven starts in a major, the world’s 5th ranked player has a second, two third-place finishes and a fourth.

Keep an eye also out for Danny Willett. The Englishman is second on the European Order of Merit, behind only McIlroy, and has not missed a cut in 10 starts. He began the season with a victory and was third in the WGC-Cadillac Match Play in San Francisco.

In Majors you cannot go by without mentioning Rickie Fowler.

Fowler plays his best when the field is strongest, including his victory in the Players Championship last month, and a third and sixth in two WGC events. Fowler was also the only player to finish in top-5 of all four majors in 2014. He’s due for a major title.