Italy’s Matteo Manassero added yet another stunning new record to his short professional career in becoming the youngest-ever winner of the BMW PGA Championship.

Manassero at age 20 years, 37 days is 60 days younger than when Scotland’s Bernard Gallacher won the event in 1969, and with victory also making amends for the Verona-born golfer losing the tournament two years ago in defeating England’s Simon Khan, and winner of the event in 2010, with a par at the record setting fourth extra play-off hole. 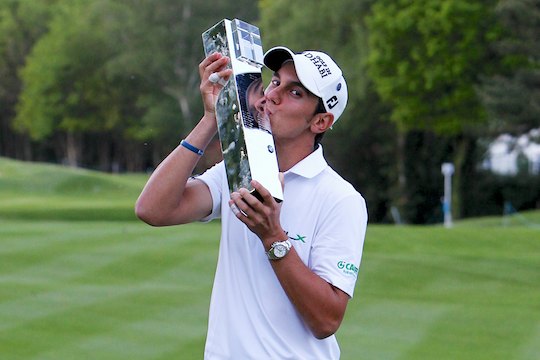 “I’m feeling amazing about this win, I also feel really proud and honoured to have won the flagship event,” he said.

“I feel extremely happy, extremely happy, because this place has always had a real special feeling to me, and I was in contention in 2011, couldn’t do it. That was Luke’s (Donald) time, but I’m so proud to win this year.”

Warren was first to bow out after having to play a provisional in finding trees off the 18th and first extra hole.

Manassero sealed victory with a par after Khan found the water guarding the green with his approach shot.

Manassero had become the youngest ever European Tour winner at age 17 years and 188 days in capturing the 2010 Castellon Masters, before adding a second win five months later in winning the 2011 Maybank Malaysian Open.

At the 2010 Masters, Manassero became the youngest player to make the cut.

Then last November, the golfer that always wears green trouser on a Sunday in honour of idol Seve Ballesteros, became the youngest teenager to win three European Tour events with victory in the Barclays Singapore Open.

He also became only the second Italian behind Costantino Rocca (1996) to win at Wentworth.

Manassero now qualifies automatically for next month’s US Open and the young Italian has set his sights on qualifying for next year’s European Ryder Cup team.

“I now have to be obviously looking at the next Ryder Cup and I really want to be there, and that’s all I can say,” he said.

“I can certainly say to you that I feel good in match play because I’ve done well at the Accenture Match-Play Championship and I’ve played a lot of match play as an amateur.”

England’s Lee Westwood let slip his chance of ending a year-long tournament victory drought posting a last round 73 for a seven under par total and a share of ninth place.

Westwood began the final round one off the lead but then raced to two shots ahead with three birdies in succession from this second hole.

However the world no. 12 dropped successive shots from the sixth before sandwiching a 12th hole double bogey either side of bogeys at 11 and 14.

Brett Rumford couldn’t match his recent Asian success and finished in a tie for 62nd with rounds of 75-71-72 and 74. Andrew Dodt was the only other Aussie to make the cut and closed at T67.