Veteran Prayad Marksaeng thrilled hometown galleries with a magnificent final round 8-under par 64 to clinch his first Thailand Open title in the opening event of the OneAsia season on Sunday.

Only a few short weeks ago, Thai golf fans were robbed of a celebration for a hometown winner when 18-year-old rookie Ariya Jutanugarn had an unfortunate triple bogey on the final hole in the Honda LPGA Thailand. 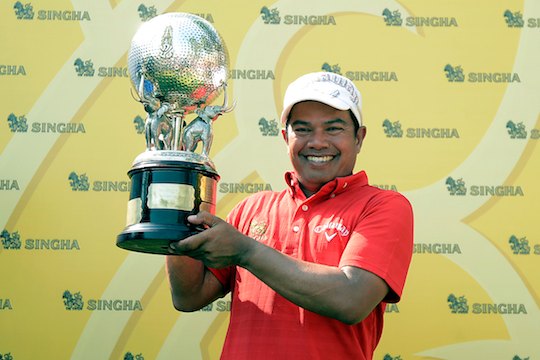 47-year old Marksaeng made up for that disappointment in spades by winning the US$1 million event that he considers to be his “most meaningful tournament of the year.”

Marksaeng’s 24-under par total at the Thana City Golf & Sports Club was two shots clear of West Australian Scott Strange with Adelaide’s Nick Cullen shooting a final round 65 to be a further shot back at 21-under in outright third place.

Strange’s final round 67 was marred by a bogey on the final hole when a birdie would have thrust him into a playoff.

Victorian David Mackenzie finished in a tied for 4th at 20-under in a group that included defending champion, Chris Wood from England.