Andrew Martin has secured his biggest professional win taking out The Players Series – Sydney on Sunday with a sizzling final round 61 and a two stroke win over third round leader Charlie Dann.

Beginning the final round eight shots off the pace, Martin fired four eagles, a birdie and a bogey to make his move on the field. 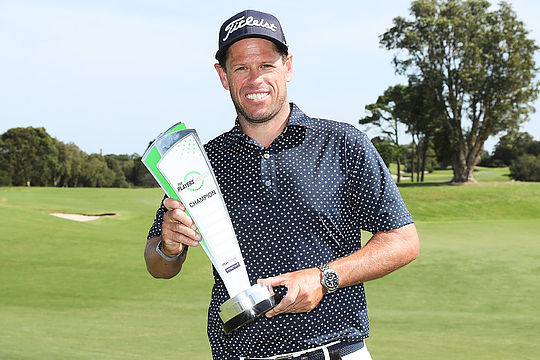 Two more birdies on the back nine after Dann reeled off three bogeys in succession opened the door for Martin, whose final round of 61 has been identified as the lowest final round to win in the history of the PGA Tour of Australasia.

Martin joins the likes of Gordon Brand Jnr , Willie Wood, Scott McCarron, Mikko Ilonen and most recently China’s Haotong Li in 2019 to record four eagles in a single round on a major tour.

His three consecutive eagles also matches the effort of Finland’s Toni Hakula at the 2019 Abierto de Chile, the only player to achieve the feat in any PGA Tour-sanctioned event.

“It’s still a bit of a whirlwind,” said Martin, who finished runner-up at the NZ PGA and Queensland PGA in 2012.

“To shoot 10-under, that’s still hard to get through my head, but mainly just the support of my family and my wife Rachel has given me to be able to keep doing this because it is tough in Australia to make a living here.”

“This is one little box ticked but there a couple more I want to do. It’s just good to show that my game is still there.”

Dann looked to be in the box seat before striking trouble on the 8th hole at Bonnie Doon. His runner-up finish on Sunday, his best result to date on the Australasian Tour.

“Things spiralled for me at the eighth by hitting that chip into the grain and I didn’t make the contact I wanted,” said Dann. “I was also fighting for a par on the next, the par 5, which has been good to me this week.”

“Things just went from there and in this game when you’re in a bit of a spiral times the pressure of the situation, it just kept happening and I was trying to work for a par. Very different experience for me for sure.”

If anything Dann will take plenty into this week’s Queensland Open. In his last two starts he has been competitive with an 11th placing at the recent Moonah Links PGA Classic and his world ranking has halved from 1639th at the start of the year to 817th this week.

The Queensland Open starts this Thursday at the Pelican Waters Golf Club with Anthony Quale looking to successfully defend his title.