Andrew Martin has pulled two shots clear to top the standings after round two in the final stage of the ISPS HANDA PGA Tour of Australasia Q-School.

The field was presented with gusty conditions early at the Sandhurst Club which proved a challenge to many. 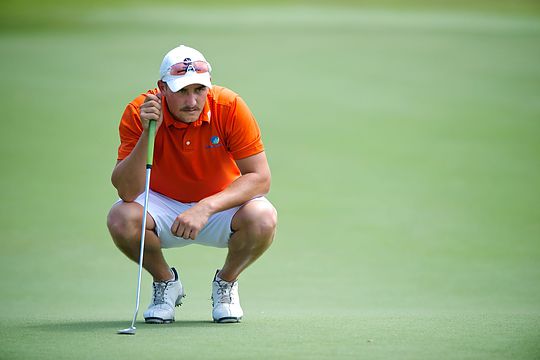 “It was very tricky to judge the wind today,” said Martin, who backed up his opening 65 with 4-under 68 and is currently on a running total of 11-under the card.

“I’m pretty happy considering the first six holes I didn’t know where the ball was going!”

“Early again today I was a bit wayward off the tee. There was a bit more of a breeze today so that made it a bit harder to trust my swing, but I was able to keep it in play and putted pretty well again.”

The Victorian took a laid back approach to today’s play and was more focused on the stronger parts of his game which have propelled him in to the lead.

“The back-9 I was just trying to play as if I was back playing golf with mates over Christmas and have a bit of fun out there.

“Putting is probably the strongest part of my game at the moment, and my chipping has been pretty good so I’m just trying to trust the things that are working well for me.”

While he’s now two shots ahead of the pack, Martin said he’s by no means getting ahead of himself with half of the tournament left to play with a talented field of golfers.

“It’s cliché but it is one shot at a time at the moment. I’ve got a score in mind after 36 holes and then another after 72 so I’m sticking to those targets I’ve set,” added Martin

“I’d love to get to 20-under after 72, the pins might be a bit harder to get to in the next couple of days, they’ve forecast for clearing showers and I don’t think the wind the is meant to be as bad.

“There’s a lot of good guys here, it’s basically a state level event so if I don’t get to it (20-under) I think someone here will.”

Climbing from T7 after round one to outright second today was Queenslander Taylor Macdonald who also shot 68 for a two round score of 9-under the card in trying conditions.

“I’ve been playing really well lately, off the tee I’ve been really good and I’m feeling really strong around the greens,” Macdonald said.

“You can’t put too much pressure on yourself, it’s a big week there’s enough pressure already.

“I just free wheel it; I hit the ball as less as I can. You’ve got to come here with an open mind and keep grinding.”

In a two-way tie for third position on 8-under is New Zealander Daniel Pearce and Victorian Josh Younger.

Josh Cabban (NSW), Christopher Wood (QLD) and Michael Choi (VIC) are all tied fifth on 7-under.

Another highlight of the day was on the par-3 8th hole where Queenslander Matthew Guyatt nailed a hole-in-one with his 6iron, his first ace in competition play and the fifth in his lifetime.