Andrew Martin outlasted three other players to secure the Victorian PGA Championship in a five hole playoff on Sunday at the Moonah Links Open course.

Martin ended the fourth round in a four-way tie for first alongside overnight leader Adam Bland, fellow Victorian Brett Coletta and New South Wales bomber Lincoln Tighe at nine-under par after Martin, Bland and Tighe all missed opportunities to secure victory on the 18th in regulation play.

Bland and Coletta’s pars at the first playoff hole knocked them out and it came down to a battle between Martin and Tighe as they traded tee shots down the par 5 18th.

The pair birdied the 4th playoff hole to extend the contest and on the fifth time going down the 18th, Martin found the green in two after Tighe ended up in a greenside bunker. Martin then rolled his third to tapping distance to secure a birdie, with Tighe making par.

It was Martin’s second win on the PGA Tour of Australasia having won at the TPC Sydney in 2021.

“I don’t think I’ve seen five drives off 18 like that since I’ve been coming down here to play. That was pretty impressive by Lincoln and he definitely had a good week,” said Martin.

“I played very well and the putter was definitely hot. It’s amazing to get the win.” 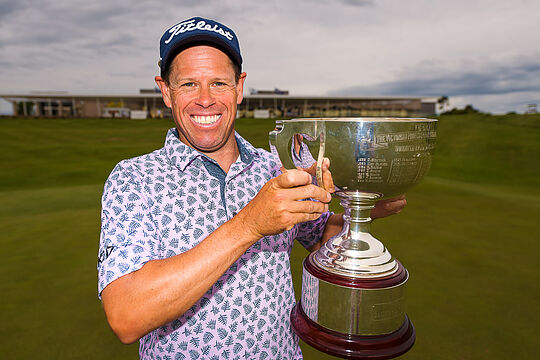