Now in its 33rd year, the Open event was increased to a 54 hole championship this year, and accorded Australian ranking status. 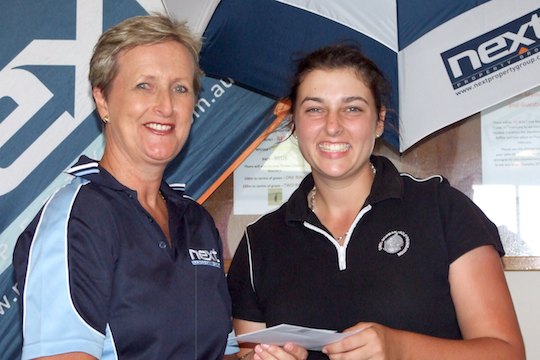 Sponsor Jodie McDonell of NEXT with winner Lauren Mason

Birdies flew freely in the practice rounds on Thursday, but some tough pins on the opening round on Friday contained free scoring, and the picturesque hilly course overlooking the Sunshine Coast lived up to its challenging reputation.

It was Queensland State Senior Team member Corinne Swan who posted the leading score of par 73.

Despite all the rain in Queensland in previous weeks, the course was in great condition, and in Round 2 talented Qld State juniors Lauren Mason and Gennai Goodwin of Mossman both equalled the course record with scores of 71.

But it was local knowledge that helped Lauren prevail in the closing holes on Sunday.

Perhaps the surprise of the tournament was the return of Trudi Petrie (Jeffrey) to competitive golf in Queensland.

Jeffrey had an impressive junior amateur career representing Queensland and Australia, before joining the professional ranks and playing on both the Australian and Japanese circuits.

Whilst in the Army she won the ADF Championship in 2007, but is just returning to golf after the birth of a son and the petite lady showed she had lost little of her competitive streak, playing in the final group on Sunday and winning the Mid Champion title.

In the 36 Hole Classic event run over the weekend in conjunction with the Open, Pine Rivers member Renee Saunders cruised to a 5 shot victory over Jodie Rockliff from Murwillumbah GC in Division 2.

Another Pine Rivers member in Jade Kendall took out Division 3 from Headland local Anne Callanan, whilst there was a win for the home club in Division 4 with Sandy Whittle taking the title by 3 shots from North Lakes’ Vicki Grant.

Division 3 Runner-up Callanan has a fabulous story to tell.

A reluctant participant in the entertaining Happy Hour “Next Property Shootout” on the signature par 3 18th on Friday evening, she wandered down for her turn to hit over the valley, not dressed for golf and wearing sandals.

But using a borrowed “A” wedge and borrowed ball she floated it in just over the wall, and with one short skip landed a hole in one.