Master of the Amateurs crowned as No.1 amateur event

The Men’s and Women’s Australian Master of the Amateurs Championships have been recognised by the R&A as the number one ranked amateur championships in Australia following the introduction of the new points system for WAGR Ranking of Counting Events.

The Men’s Australian Master of the Amateurs received 783.7001 points to clearly top the Australian ranking list with the Australian Men’s Amateur Championship coming in a distant second with 666.0265 points. 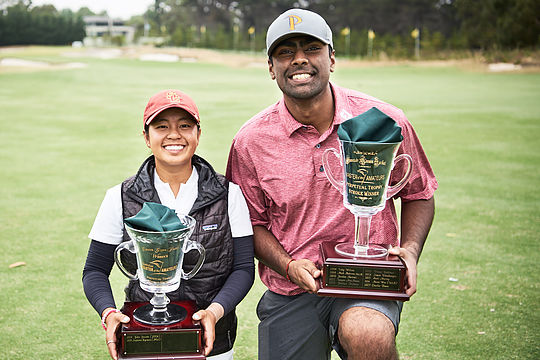 The Women’s Australian Master of the Amateurs received 646.3861 points to also take the top ranked position in the women’s rankings with the Australian Women’s Amateur Championship also ranking second have received 497.0368 points.

The new points system for WAGR Ranking of Counting Events commenced the 1st January 2020. This replaces the category system previously applied by WAGR. The points reflect the quality of the playing field in R&A Counting Events. The higher the points, the higher the quality of the field. The maximum number of points for any amateur event is 1,000 points.

Tournament founders, Peter and Angela Mann, were ecstatic with the new ranking of their tournament.

“We are proud and honoured to be recognised as the highest nationally ranked championship in both the men’s and women’s events in the country,” said Peter Mann.

“We look forward to increasing the men’s field to 90 and the women’s to 60 with a cut after 54 holes. The field has been increased due to the high international demand by countries to send their best amateurs to our event. This year the field was over 70% internationals and both our champions were from outside Australia and we have a history of producing true international champions.”

Peter and Angela Mann are rightly proud of establishing and maintaining a tournament which has become recognised around the world. In fact the tournament, both men’s and women’s in January was ranked at number one for both events in the world.

“We first started this event at Royal Pines in 1997 and then moved in 2001 to the famed sand belt in Melbourne and have stayed since with the support of the Victoria state government.”

“The tournament has grown from strength to strength with loyal sponsors and we’ve been fortunate to be able to stage the event at world famous courses like The Royal Melbourne Golf Cub and this year Victoria Golf Club, which was a great success.”

With notable past players including Jason Day, who won the title in 2006, Rickie Fowler, Patrick Rodgers, Andy Sullivan, Morgan Hoffman, Tommy Fleetwood, Bryson DeChambeau and Aaron Wise, to name a few, it’s any wonder the tournament has been a stepping stone for some of the world’s best professionals, but also is properly recognised as a true international amateur championship and ranked highly by the R&A.