Adam Scott will be welcomed back to his home town with huge fanfare, with the Australian PGA Championship his first appearance back in Australia since his memorable US Masters breakthrough at Augusta in March.

The Gold Coast native has become a marketing dream pushing his personal worth to an estimated $45 million. He banked $US$4,892,611 on the PGA Tour this year, bolstered by the $US1.44 million Masters cheque. 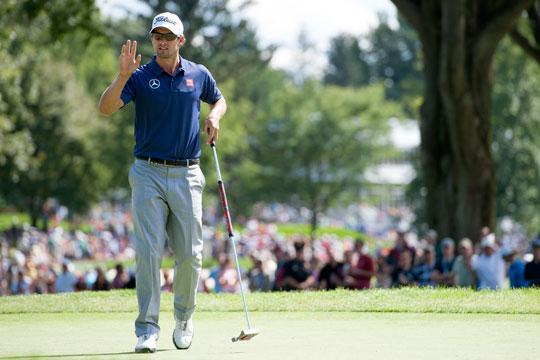 That took his career prizemoney to $US33,100,065 and added to the estimated six million dollars he made over the past 12 months through his sponsorship deals.

And there appears to be no holding back this week on the Gold Coast as the “Tour” hits the town for the Australian PGA Championship starting Thursday at The Royal Pines Resort.

Snedeker won twice this year on the PGA Tour winning at the AT&T Pebble Beach National Pro-Am and the Canadian Open to join Tiger Woods, Phil Mickelson and Matt Kuchar as the season’s only multiple winners on the PGA Tour.

Fowler is no stranger to playing down under having first cut his teeth at the Australian Master of the Amateurs in 2007 before playing this event previously in 2011. With one win on the PGA Tour at the 2012 Wells Fargo Championship, Fowler this season made the cut in 18 of 22 starts with a tied 3rd at the Arnold Palmer Invitational the best of his five top-10 finishes.

Marc Leishman is another who will challenge for the title and enters this event on the back of solid efforts in the majors this season which saw the world number 68 selected as a Captain’s pick at the Presidents Cup.

Leishman this year finished tied 4th in his second start at the Masters after holding a share of the first-round lead. At the PGA Championship in Rochester the Aussie was one of four players who did not shoot an over-par round and went onto finish in a tie for 12th.

Scott Hend is enjoying a purple patch at present with the tour journeyman a three-time winner this season in Asia producing the 40-year-old’s hottest streak in seven seasons. You would expect another strong showing from Hend this week on the Gold Coast.

Hend has won three times in Australia, and was the inaugural winner of the Von Nida Tour Order of Merit in 2003. He has also won on the Canadian Tour, at the 2002 Victoria Open.

This year’s event also sees a number of rookie professionals plying their trade with Nathan Holman and Brett Drewitt gaining starts. Holman received a sponsor’s invite, while Drewitt pre-qualifying on Monday with 68 at Coolangatta-Tweed Heads.

Royal Pines takes over as the PGA Championship’s venue after the tournament was moved from its previous home at Coolum, following a problematic 2012 event where PGA officials clashed head on with eccentric billionaire resort owner Clive Palmer.

Victorian Daniel Popovic is the reigning champion following his feel-good victory last year at Coolum but won’t defend as he attempts to secure his European Tour card.