Masters champion Adam Scott has grabbed the outright lead after his second round at the Australian PGA Championship on the Gold Coast.

The world number two carded a 4-under 67 for the day to be at 10-under, two shots clear of compatriot David McKenzie and three strokes ahead of overnight leader, American Rickie Fowler.

Nathan Green had a slow start to the second round as he bogeyed the first but recovered to card 4-under for the day to sit in a tie for third with Fowler and Kiwi Gareth Paddison.

Today’s second round was “Green Day” and fans turned wearing green after the PGA Tour of Australasia encouraged people to celebrate Scott’s victory at Augusta National.

Even the field was predominantly wearing a green theme and afterwards Scott attended the hundreds of fans who lined up to get a photo with the Masters Champ wearing the green jacket.

“It was nice to see everyone out there in so much green,” said Scott.

“Everyone embraced it, even the players, which is really special for me, to think that my peers would do that.”

As to his second round 67 that added to Scott’s opening round of 65, the world number two felt he left a few shots out there. 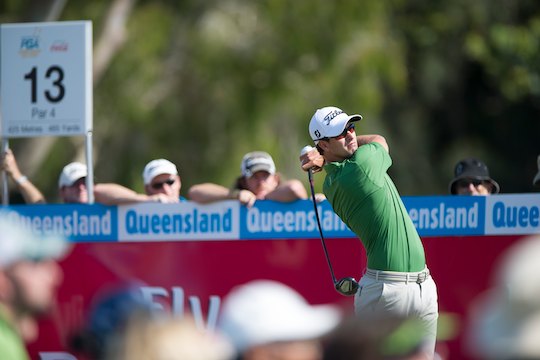 “There was a bit of a mixed bag today,” said Scott, who fired the day’s equal best round.

“I got off to a great start but couldn’t keep it going. I found it a little tricky to get in the eye in today.”

“I obviously didn’t drive it like I did yesterday but I wasn’t really expecting too.”

“The course is presenting a good challenge. Even though the greens are big and flat, it is hard to hit it close.”

“I lot will depend on the wind as to how hard this course gets and this will effect the score.”

With a two stroke lead over the field heading into the weekend, Scott knows it will be the player who cards the most birdies over the next two rounds that will have the upper hand.

“I think it’s probably more about who’s going to make the most birdies. You can recover from a bogey but not a double and if there aren’t too many doubles out there, you are going to have to make a lot of birdies.”