Masters champion Danny Willett returned to Europe to upstage tournament host, Rory McIlroy in a masterful display on the opening day of the Dubai Duty Free Irish Open in Ireland.

Willett seized eight birdies in a seven-under par 65 to lead McIlroy by two shots in bright but windy conditions on the K Club course just to the south of Dublin. 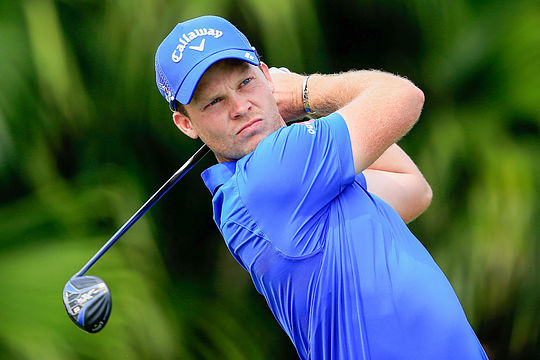 The current World No. 9 ranked Willett and McIlroy, who is presently No. 3 in the world, were in a class of their own and with McIlroy, like Willett, dropping just one shot in his round.

Willett’s effort is his equal lowest in 25 rounds of European Tour counting events this year while the 28-year old Sheffield-born golfer recorded just 23 putts in the first major round of competition on the K Club course since hosting the 2006 Ryder Cup.

Both Willett and McIlroy teed-up on European soil for a first time this year and each after indifferent displays a week ago in the PGA Tour’s Players Championship where Willett had missed the cut in the first event since capturing the Masters.

“It was nice coming off a pretty poor week last week and getting here Monday and trying to get some work done with my coach, and getting everything sorted out,” said Willett.

“This is the first time I have played this golf course and it’s just fantastic. Every hole’s different. There’s a few really challenging holes, a few good, fun holes.

“It was a good day. Played some really good golf with some birdies to start with and then started getting hot with the putter.”

“You really can’t go out there and expect to shoot any kind of number but a 65 was far beyond my expectations for today, especially after waking up and looking out the window and it was miserable and raining.”

“So any time you get to play a fantastic golf course and you’re in good nick, you’re always happy.”

McIlroy’s round not only equalled a 67 he shot in the 2008 Irish Open but it was 13 shots fewer than an 80 he began the event with a year ago while it is a first Irish Open since 2010 when the four-time Major winner also commenced with a 67.

“I really tried to focus on being 100% ready when the gun went off on the first tee and I felt like I’ve done that for the most part,” he said.

“I hit the ball well tee-to-green and I took my chances. I basically did everything I wanted to do out there and I feel like 5-under is a fair reflection how I played today.”

McIlroy enjoyed a prolific-winning amateur career in his homeland before turning pro late in 2007 but since then he’s yet to enjoy success on home soil.

And given it is now some six months since McIlroy last tasted success he has given himself a great platform to capture the €4 million event.

“I just get goose bumps about thoughts of winning an Irish Open, so I can’t think about it too much, “ he said.

“But to win here, no matter what the circumstances are, whether I’ve won the week before or whether I haven’t won in six months, to win the Irish Open would be something that would be very special.”

“I’ve got off to a great start towards doing that and I just have to keep playing the way I did today.”

England’s Callum Shinkwin and South African Jaco Van Zyl are tied in third place on four under par while double Major winning Martin Kaymer is among a group at three under par.