New South Welshman Andrew Evans has been extended an invite to compete at the Australian PGA Championship on the back of his recent impressive performance.

Golf is a game of opportunity, where good play is rewarded by increased opportunities to compete on the biggest stages. 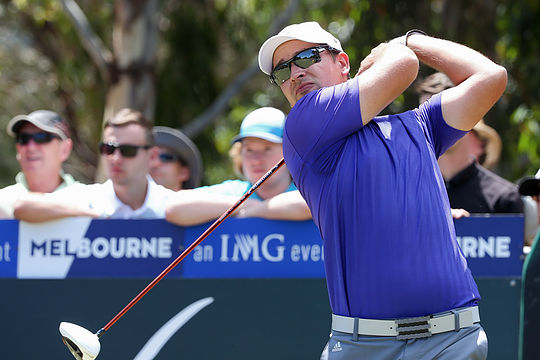 Andrew Evans tees off at the Australian Masters where he finished runner-up behind Peter Senior (Credit: PGA Australia/SMP Images)

However, sometimes anomalies do occur which was the situation for UNIQLO Masters runner-up Andrew Evans.

Not holding a Tour card with the PGA Tour of Australasia, Evans pre-qualified for the UNIQLO Masters last week.

Seizing the moment, Evans turned in an impressive performance at Huntingdale to finish tied runner-up to Peter Senior.

While it is sometimes common for the top-2 players, not already exempt into the next tournament, from the top-10 finishers to gain a start in the next event, this exemption does not apply to PGA Tour of Australasia tournaments that are co-sanctioned by another Tour in the following week.

Aware of the exemption categories, Evans headed to pre-qualifying for the Emirates Australian Open but missed out on gaining one of the eight places on offer by one shot.

“Not holding status on the Tour does makes it a very difficult year, you can’t build a solid schedule, instead spending the season pre-qualifying for tournaments,” said Evans who also Monday qualified for the NSW Open.

“I was very proud to have made the field for the UNIQLO Masters and worked hard to ensure that I gave myself the best chance of playing well at Huntingdale, I was really happy with my performance. My goal was to try and secure my card for next year and I achieved that.”

“There was a moment of disappointment when I realised that I wasn’t going to be playing in the Emirates Australian Open but that’s golf and I just have to make sure I continue to play well in the tournaments I do earn a start in.”

Recognising Evans’ quality performance last week the PGA of Australia has been working on an invitation for the 29-year-old to compete at the Australian PGA Championship.

“The entire golf community was very impressed with Andrew’s performance at the UNIQLO Masters last week and felt his disappointment that he wouldn’t be competing at the Emirates Australian Open, golf is a challenging game on and off the course,” said Brian Thorburn, CEO of the PGA of Australia.

“We have spent the last few days finding a way to include Andrew in the Australian PGA Championship as recognition of his excellent tournament at Huntingdale.”

“We are delighted to extend Andrew an invitation to the tournament and we hope that he will maximise this chance to further progress his career with another solid week on the Gold Coast.”

This invitation provides Evans the opportunity to tee it up in Australia’s richest tournament with any prize money he earns further securing his Tour card for the 2016 season.

Like all young players in the Australian PGA Championship, Evans is also acutely aware of the career opportunities the tournament presents by being co-sanctioned with the European Tour; the winner will be exempt onto the lucrative tour until the end of the 2017 season.

“I am ecstatic that I have been given an invitation for the Australian PGA Championship and I can’t thank the PGA enough for the opportunity.”

“The Aussie PGA is a huge tournament with a lot to play well for, one good week really can set up a career and a win would help me to achieve one of my career goals; competing on an international Tour.”

“I will spend this week working hard on my game to ensure I give myself the best chance of playing well on the Gold Coast, it’s very important to me to have another good week competing in the Tour’s biggest tournaments.”