Hideki Matsuyama created history in cruising to an effortless seven shot victory success in the WGC-HSBC Champions in Shanghai.

Matsuyama, 24 became the first Japan-born golfer to win a WGC title and he did it in style in posting a final round six-under par 66 and a 23 under par total on the Sheshan course.

Sweden’s Henrik Stenson muscled his way to a share of second with a closing 65 at 16-under par to move to top spot in the Race to Dubai standings and overhauling the struggling Danny Willett entering the Final Series.

American Daniel Berger (69) tied with Stenson and one clear of Rory McIlroy (66) and American in Bill Haas (69) at 15-under par. 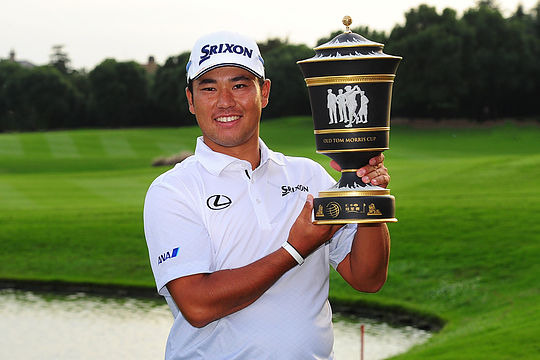 The victory is a continuation of some remarkable recent form with a win at the Japan Open and a second-placed finish at the CIMB Classic in the previous two weeks. Those results moved him into the top ten in the Official World Golf Ranking this week and he could now go as high as sixth.

“Winning today, I feel has got me closer to being able to compete a lot better in the Major tournaments,” he said. “My next goal is, of course, to win a Major and I’m going to do all that I can to prepare well for that.”

“I was really nervous at the start of the day but I was able to birdie hole number one. I kind of got myself into the rhythm of the day and after that, it was smooth sailing.”

“I really don’t know why I played well this week. The last three years, I’ve had to withdraw twice and I didn’t play very well the other year.”

“My next goal is, of course, to win a Major and I’m going to do all that I can to prepare well for that.”

“But I got off to a good start. I really didn’t make any changes to my golf swing or anything. But I have putted really well these last three weeks, and that’s probably the difference. I did play well today. I hit the ball a lot better. But putting was the difference this week.”

An opening birdie set the tone for the day and further gains on the fifth and seventh extended his lead to four at the turn. A 30-foot putt on the 13th started a hat-trick of birdies and when he put a stunning approach into the 15th, the rest of the field were eight shots behind.

Closing pars on the final two holes – despite finding the water on the 18th – meant Matsuyama finished the week with 29 birdies as he took his bogey-free run to 45 holes.

Adam Scott made up for his inexplicable second round 80 to fire a final round 6-under 66 to claim equal 14th place.

Scott Hend was next best in a tie for 54th with Jordan Zunic (T58), Matt Millar (T68), Marcus Fraser (T70) and Nathan Holman (T77) rounding out the Aussies in China this week.