Matsuyama fighting to get fit for Masters defence

Hideki Matsuyama is doing all he can to be fit for his Masters defence in just a weeks’ time.

The 30-year-old became the first Japanese player in history to win the Masters, or in fact any men’s major championship, finishing one shot ahead of Augusta debutant, Will Zalatoris. 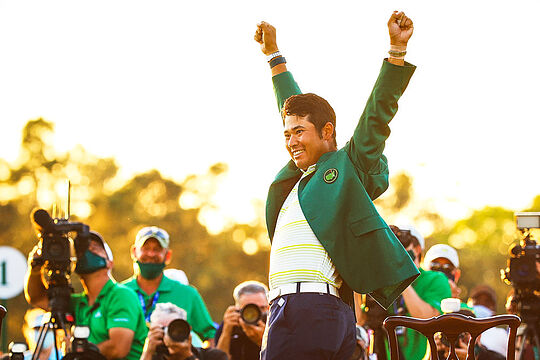 The World No.12 last played at the Arnold Palmer Invitational in early March where he closed in a share of 20th place. He pulled out of The Players Championship a week later due to a neck and shoulder injury he picked up at Bay Hill and remained on the sidelines at last week’s WGC-Dell Technologies Match Play.

“I’ve been receiving a lot of treatment, getting prepared,” said Matsuyama of his race to be fit. “Really yesterday was the first day that I’ve been able to have a good practice session.”

“My recovery is moving forward. Each day it gets better. Probably at 80 percent right now. Planning to practice hard this week and I’m intending to play in the Valero Texas Open as long as the pain keeps subsiding.”

Matsuyama is currently listed on the official teetimes for the Texas Open starting on Thursday alongside Chad Ramey and Hudson Swafford.

“Going to the Masters is something very special for me and something I’ve really been looking forward to, so I’m going to do my very best to be as prepared as I can to defend my title there.”

Despite the injury, Matsuyama has enjoyed a stellar season after notching up victories at the ZOZO Championship in Japan and again at the Sony Open in Hawaii plus a pair of top-10 results at the Phoenix Open and the season-opening Fortinet Championship.

Injury recovery isn’t the only thing on the 8-time PGA Tour winner’s mind either. There’s a Masters menu to be decided and the usual Champions Dinner speeches to be written.

“I don’t speak English very well, and so it’s kind of a two-sided coin. I’m looking forward to it [Champions Dinner], of course, to be with all those great past Masters champions, but at the same time, too, very nervous about the speech I will be giving,” said Matsuyama, who normally communicates with the media via his long-time interpreter Bob Turner.

Turner, a former Mormon missionary, also manages Matsuyama and spends up to 30 weeks a year travelling with the Japanese star.

Matsuyama and the rest of the field will tee off at Augusta National from April 7th. It will mark the first time the tournament will be played as “normal” with the Par-3 Contest back on the Wednesday schedule and spectators returning en masse for the first time since COVID struck.