Japan’s Hideki Matsuyama has stormed to victory at the US$9,750,000 World Golf Championships – Bridgestone Invitational with a final round of 9-under 61 at the Firestone Country Club, Ohio.

Matsuyama birdied his closing three holes to surge ahead of Zach Johnson and Charley Hoffman to become the first Japanese player ever to win the title. It is his second WGC win after claiming his maiden victory at the HSBC Champions last year in China.

“I did hit some good shots but I was nervous all the way around because I really wasn’t sure of my swing today,” Matsuyama said via his interpreter.

“But when you’re making birdies you get relaxed real quick,” he joked.

When asked about his record setting round Matsuyama pointed out that he played with Tiger four years ago at the 2013 event when Woods shot 61 in the second round before going on to win the event by seven shots from Keegan Bradley and Henrik Stenson. 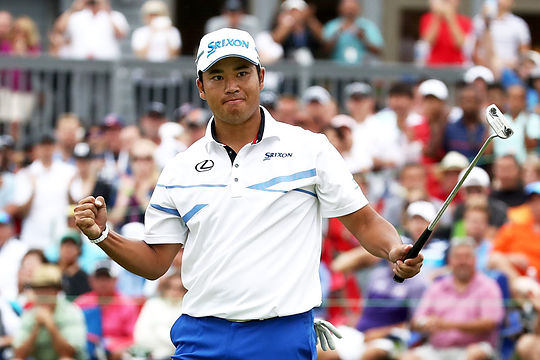 The World No. 3 tied the course record held by a trio of Masters champions – Jose Maria Olazabal, Tiger Woods and Sergio Garcia.

Matsuyama now moves ahead of Jordan Spieth to No.1 in the FedEx Cup race and will be the red-hot favourite at the PGA Championship next week. He finished T4 last year at Baltusrol Golf Club in New Jersey and has had six top-10 major finishes with his best result coming at this year’s US Open (T2).

Scott Hend led the way for the Aussies with a third round 63 putting him well in contention on Sunday morning before a final round 73 alongside Matsuyama’s record setting round saw him fall into a share of 10th at 5-under.