Japan’s Masters hero, Hideki Matsuyama, will tee off tonight (AEST) for the first time on the the PGA Tour since winning at Augusta National early last month.

Matsuyama has spent most of the last month back in his homeland celebrating the historical victory – the first ever by a Japanese male. 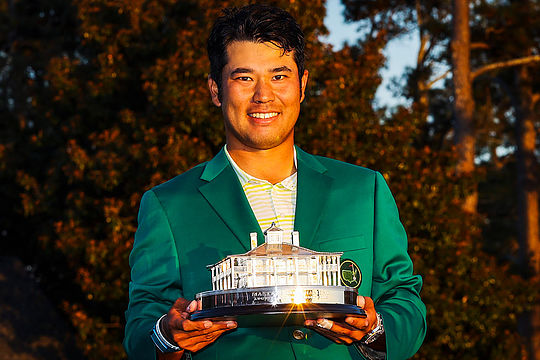 “A bit embarrassing,” said the 29-year-old in a typically Japanese way. “I’m not used to all that attention but grateful that people took notice.”

“Probably the one thing that stands out is I got back to Japan and I was quarantined for two weeks and I was able to probably read every news article and newspaper and magazine and TV. And seeing how the Masters win was portrayed in Japan was great, really unforgettable.”

It is something he is going to have to get used to with the trappings of owning a green jacket lasting longer than most. Matsuyama was already a celebrity in his home country and now with his Masters win that level of fame has reached new heights.

“I realise now the responsibility that goes with a major championship, especially the Masters. I’m honoured. I’m flattered by the added attention, but at the same time, sometimes it’s difficult to say no. But it goes with the territory and, again, grateful that I have this opportunity and I’ll try my best to prepare well for what’s to come.”

Following a long break, Matsuyama will get down to business on Thursday alongside Sung Kang and Jon Rahm and will be keen to get four tournament rounds under his belt before heading to Kiawah Island for next week’s PGA Championship and the second major of the year.

“I didn’t get to practice very much at all. And then coming back here…really one of my goals now is just to try to find my game again and prepare for the PGA Championship next week.”

And with 11 months still to go the inevitable question came up about the menu for the Champions Dinner.

“Yeah, sushi does come to mind. I’m a little worried. I don’t know if everyone will really like sushi or not, but I’m going to check with some people and get their advice and what they think. There’s a lot of really good food from Japan, a lot of, some of the best beef in the world, so I’m thinking about that and looking forward to it next year.”

While sushi may ruffle some feathers it can’t be any worse than some of the bland and offerings over the years including Nick Faldo’s fish and chips, Bubba Watson’s macaroni & cheese or Tiger’s burgers, chicken sandwiches, French fries and milkshakes.

Hopefully Matsuyama sticks by his choices and doesn’t fold for the Americans or Poms…there’s always a spare serviette close by if it’s not to their taste.