Reigning Masters champion Hideki Matsuyama has pulled off an incredible back-nine effort to secure a playoff win over Russell Henley at the Sony Open in Hawaii.

Matsuyama clawed back five shots across the final nine holes thanks to four birdies including one at the final hole and a bogey from playing partner Russell Henley at the par-3 11th, leaving both players tied at 23-under and facing an unlikely playoff earlier in the day.

Henley was immediately in trouble off the tee, landing in a fairway bunker and forced to lay up for his second shot while Matsuyama was safely in the fairway and pulled off a miracle 3-wood into the sun to land his ball just a metre from the hole much to the delight of the crowd.

Henley flew his third shot over the green and was forced to chip onto green and eventually made bogey. It didn’t matter at that stage however, as Matsuyama calmly put his short eagle putt in the bottom of the hole for an eighth PGA Tour title and his fourth playoff win. 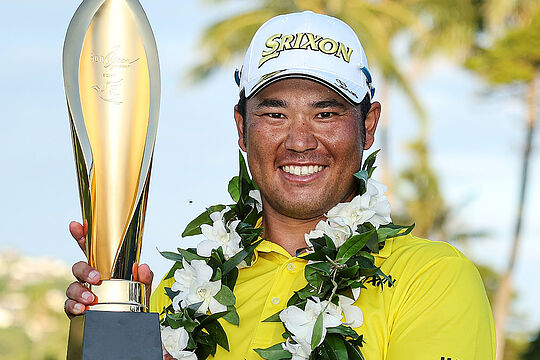 “I feel great. To be able to win back-to-back with ZOZO and here at the Sony, and especially on a course that I haven’t really played that well. It’s a tough golf course for me. So I’m extra excited, extra happy because of that.”

“I’ll have my share of sake tonight and we’ll see you all in San Diego at Torrey Pines,” said Matsuyama, who indicated he is taking time off with his family before heading to the mainland for the Farmers Insurance Open in late January.

The 29-year-old now sits equal with South Korea’s K.J. Choi for most PGA Tour victories by an Asian-born player. Also of note was Matsuyama recording this feat on a course where the great Isao Aoki became the first Japanese player to win on the PGA Tour way back in 1983 – Aoki’s only U.S. win despite 51 titles in his home country.

Kevin Kisner and Ireland’s Seamus Power tied for third place on 19-under with Michael Thompson and Lucas Glover another shot back in equal 5th.

Following Cam Smith’s and Matt Jones’ heroics last week, it was a quiet week for the Australians with Cam Davis carding the best result following three rounds of 66 before a final round ever-par 70 saw him drop back 18 places into a share of 27th.

Marc Leishman (T36) and Brett Drewitt (T55) were the only other Aussies to make it through to the weekend.

Next on the schedule is the $7,600,000 American Express tournament at the Pete Dye Stadium Course in La Quinta, California where Sydney’s Cam Davis finished outright third behind winner Si Woo Kim last year.