Japan’s Hideki Matsuyama took out the Waste Management Phoenix Open on the fourth hole of a playoff for the second straight year outlasting American Webb Simpson at TPC Scottsdale on Sunday.

Matsuyama won with a 6 metre birdie putt on the short par-4 17th, the same hole where the 24-year-old Japanese star finished off Rickie Fowler a year ago.

The new world number five closed with a 5-under 66, parring the final three holes to match Simpson at 17-under. Simpson birdied three of the last four for a 64, the best round of the day and was naturally disappointed to have come up so short despite a strong finish.

“I just had faith and believed that my chance would come again, and I just waited and waited, had patience,” said Matsuyama through an interpreter.

“Finally, that last one went in. Playing in front of the number of fans and gallery this past week, great motivation. I just try to have fun with it, and at the same time, keep my focus.” 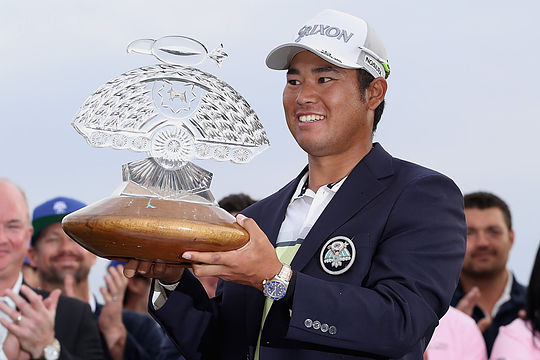 There were a number of positives for Simpson, who is winless on the PGA Tour since 2013 where he won the Shriners Hospitals for Children Open, a year after collecting the 2012 US Open title.

“I feel like two weeks ago I was pretty lost,” said Simpson. “I didn’t hit it that great the first couple rounds. [My caddie] Paul [Tesori] notices something, so we go work on it. You know, that’s all we do is kind of fine-tune everything. And came out this weekend and I hit it great.”

Jordan Spieth recorded a top-10 result finishing in a tie for 9th at 12-under.

The Australian effort was marred by another disgraceful episode in off course alcohol related behaviour with Steven Bowditch being held in-custody on an Extreme DUI charge which indicates a blood alcohol reading in excess of 0.20.

A motorist called the Scottsdale Police Department to report an impaired driver that was swerving all over the road in a white pickup. A Scottsdale officer found the pickup at a busy intersection with Bowditch asleep behind the wheel.

Police confirmed that because the charge is a misdemeanour, Bowditch was able to see a judge and be released on bail to make his second-round tee time