Australia’s Matthew Giles sank a clutch birdie putt on the last hole to win the US$76,000 Bali National Golf Championship by one-shot on Sunday.

The 25-year-old was tied with Lindsay Renolds of Canada before holing a 30-feet birdie to win his first Asian Development Tour (ADT) title with a closing three-under-par 69 at the Bali National Golf Club. 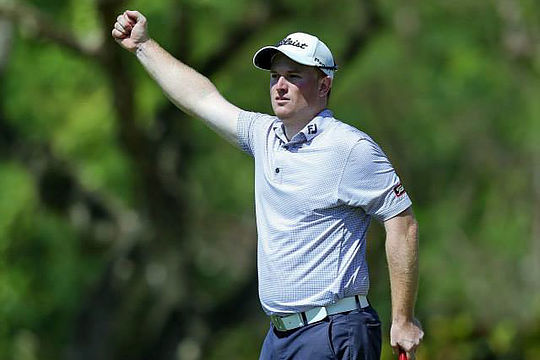 Renolds, who led by two shots early in the round, shot a 68 to settle for his fourth runner-up finish on the ADT while Sutijet Kooratanapisan of Thailand and current Order of Merit leader Hsieh Chi-hsien of Chinese Taipei finished third and fourth respectively.

“It is always nice to make a putt on the 18th hole to win an event. It feels fantastic. It has been a great week,” said Giles, who totalled 12-under-par 276 to win US$13,300 and earn six valuable Official World Golf Ranking points.Matthew Giles 2

Giles got off to a slow start when he turned in one-over-par 36 but bounced back on his homeward nine with five birdies against one bogey.

“This is a demanding course. There are holes where you can make birdies or eagles but if you hit a bad shot then you will be punished. Every hole has its own little challenge. I just stayed in the moment and thankfully it worked out.

“The front nine is more challenging. I grinded out on the front and was lucky enough to birdie 10, 11, 13 and 15. I think I probably played 10 or nine-under on the back nine for the tournament,” he smiled.

It was a case of so close but yet so far for Renolds, who holed seven birdies against three bogeys to charge in contention before being defeated by Giles’ brilliant birdie finish.

“I had a lot of demons in the past with how I finished events but I didn’t give the tournament away because Matthew Giles made a really good putt on the last to win. It is not a good way of losing but it is the way a tournament should be won,” said Phuket-based Renolds.