Matt Jones has become the latest Australian success story at the Honda Classic following a five-shot win over Brandon Hagy at the PGA National in Palm Beach Gardens, Florida.

Jones, a two-time Australian Open champion, now joins the multiple PGA Tour title club adding to his 2014 playoff win over Matt Kuchar at the Houston Open. It also extends the record to 33 years in a row that an Australian has won on the PGA Tour

His victory in 2014 qualified him for the Masters and history will repeat itself again this year with the 40-year-old set for a return to the hallowed grounds of Augusta National in just a few weeks’ time.

“It’s been a tough seven years [since his last win], I’ve had ups and I’ve had downs, as all golfers have, but, I mean, it gets me into a lot of big tournaments now. I can go prep for Augusta, which is nice. Last time I had four days to prepare and it was a bit tough, so I’m looking forward to it.”

Even prior his equal course record 9-under 61 in round one, Jones had a strong feeling he was going to do well in the $7 million event.

What’s In The Bag: Matt Jones

“At the Players last week, I told my coach and I told my friends, something’s coming, it’s getting closer.”

“I have a funny text that I sent someone, because I was hitting it pretty good on Tuesday, Wednesday, and I said, if someone beats me this week they have cheated, which I was pretty confident going into the week, which is not normal for me,” said Jones, who came into the week sitting at World No. 83 and is now inside the top 50 at No.49. 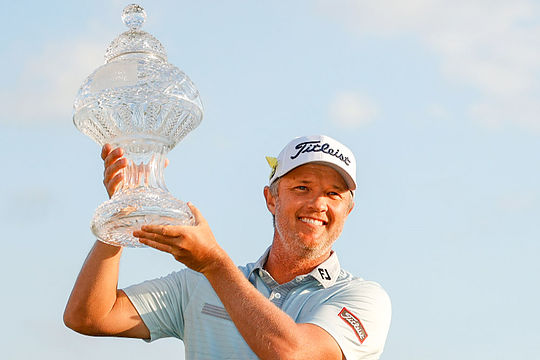 “I mean, it was was just so goof. I was very comfortable controlling the ball flight and trajectory all week. So it was great. And it’s something that I hope I can continue on with.”

His five-shot win is the first Australian victory of 2021 on any major tour and coincides with the Sydneysider’s 20th year anniversary on the PGA Tour.

Jones had not previously qualified for this week’s WGC – Dell Match-Play Championship and outside of a previously planned family vacation, he will now have plenty of time to get in shape for Augusta.

And how about the Olympics?

“I’ve thought about it, I actually because I turned it down last time, which in hindsight’s probably, I would have liked to have done it. It would have been nice to say I was an Olympic athlete or I played in the Olympics.”

“It’s something I’ll think about now. Of course Presidents Cup’s always on my mind, which is something I’ve always wanted to play in. I’ve been close a couple of times, but this will help me in that regard as well.”

2016 Honda Classic champion, Adam Scott, finished the next best of the Australians in a share of 13th place followed by Cameron Davis in equal 33rd despite an opening round of 66.

Lucas Herbert’s final round 73 saw him fall away into a share of 46th with Cameron Percy and Rhein Gibson missing the weekend cut.

The PGA Tour now heads to Austin, Texas for the $10.5 million World Golf Championships-Dell Technologies Match Play where Kevin Kisner will defend his title from 2019 following last year’s cancellation due to COVID-19.