Matthew Giles birdied the final hole at 13th Beach to snatch a one stroke victory at the Victorian Open over Ryan Lynch and Nathan Holman.

Giles, who has been US based since attending college at USC five years ago, played a flawless final round 67 after opening rounds of 69-71-68 to finish at 13-under-par. 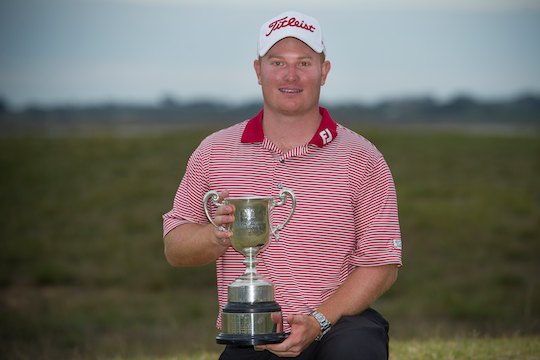 “I will head back to the States to play some mini-tours and this certainly does the confidence well,” said the 23-year-old Giles, who previously had status on the Web.Com Tour.

“I have been playing well but just not finishing it off. Things felt good this week, the course suited my eye and I was able to get over the line.”

The Beach Course proved a formidable test for the field.

During today’s final round Giles kept his composure and drove the ball brilliantly. Ultimately, it would prove to be his short game that got the job done.

“I birdied two of the last three holes to get in with a chance,” said Giles.

“It got a little difficult towards the end. I actually thought that I would have to shoot 6-under when I started this morning after Richard [Green] and Matt [Griffin] were tearing up the course. So I figured that I could get some type of score going.”

Overnight leader Nathan Holman can hold his head up high after a final round 2-under-par 70 to finish the top-amateur and runner-up with Ryan Lynch.

Holman had a chance to force a play-off after nearly reaching the 486 metre, par 5 18th in two.

Needing to make an up-and-down, Holman’s chip raced past the pin to leave a delicate downhill 8-footer. When his putt slipped by the cup, the title would fall to Giles.

Holman held the lead for the best part of the round and was obviously dejected having being so close to his maiden professional victory. Despite the final result, there will be opportunities in the future for this talented 21-year-old.

Stephen Dartnall and Neven Basic finished in a tie for 4th at 11-under with the pair carding final rounds of 66.

Bradley Hughes, Steven Jones, Aaron Townsend and Leigh McKechnie finished in a tie for 6th at 10-under, with Peter O’Malley rounding out the top-10 at 9-under.