The 28-year-old held off Danielle Kang by a stroke on the Great Waters Course, closing with a 3-under 69 for a 16-under finish to break through on the tour. McDonald’s best LPGA Tour finish this season before Sunday was a tied 11th at the Victorian Open last June in Australia. 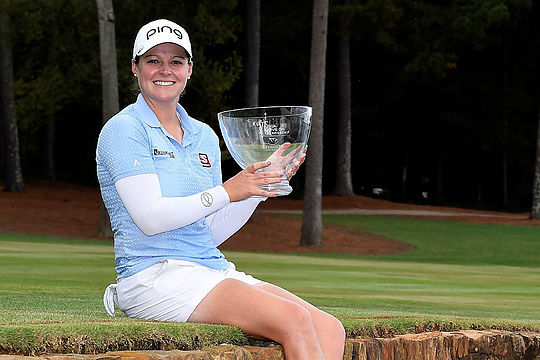 “I’ve never doubted my ability, but I’ve definitely questioned whether I would be able to win out here,” said McDonald.

“It’s really hard to win out here. So, I’ve just really hung in there and tried to stick to my process since day one. That was able to get me in the winner’s circle today. I’m really thankful.”

Aussie Katherine Kirk secured a top-10 finish with a tie for 6th position at 11-under, five behind McDonald.

Su Oh and Hannah Green also recorded top-20 results with Oh at 8-under and a share of 13th position and Green a shot behind for a share of 17th position.

Minjee Lee finished in a share of 60th position at 2-over to round out the Australian contingent to make the weekend.

Due to the cancellation of the lucrative Asian swing, the LPGA Tour now has three weeks off before its next event the Pelican Women’s Championship in Florida commencing 19th November which will lead into the rescheduled US Women’s Open, which tees off 10th December in Houston, Texas.