Graeme McDowell captured his third victory of the season with a tearaway success in the French Open in Versailles. It sends McDowell to next week’s Open Championship in the best form possible.

However, since the Masters, McDowell has missed the cut four times but won the other three. 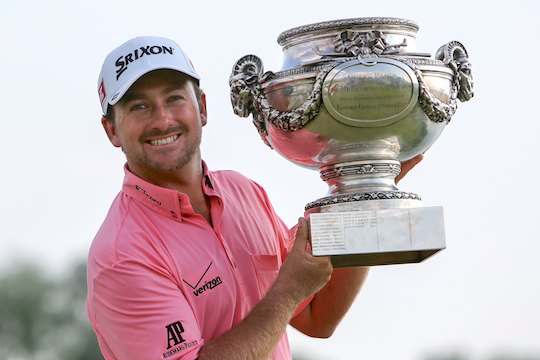 The former US Open champion carded a brilliant closing 67 at Le Golf National to finish nine under par, four clear of South Africa’s Richard Sterne, who had been only one behind until bogeys at the 16th and 17th allowed McDowell a victory march down the 18th fairway.

Sterne eventually did well to par the 18th for a final round of 71 to make sure of outright second, with 2007 winner Graeme Storm and Spain’s Eduardo de la Riva a shot behind.

McDowell missed the cut in last week’s Irish Open but reaped the rewards of staying on at Carton House over the weekend to work on his game, the first prize of €500,000 taking him within €30,000 of US Open Champion Justin Rose at the top of The Race to Dubai.

“It’s been a bit of a battle. It’s been a funny year. My game has not felt far away most weeks but I have missed a lot more cuts than normal and missing cuts hurts.”

“It certainly motivated me a lot the last few weeks. The US Open was a tough one to take and missing the cut in Ireland last week; it made me more hungry to want to be in positions like I was this afternoon.”

“To win a title as prestigious as the French Open over a course that I think is the best we play on The European Tour, is very special and something I will remember for a long time.”

McDowell was quick to extol the virtues of Le Golf National as a Ryder Cup host venue, with the Versailles course set to host the biennal match between Europe and the United States in 2018.

“It’s going to be a phenomenal venue come 2018,” he said. “I think the guys, Jean Van de Velde and his team, have done a fantastic job here.”

“This golf course has got better and better every year and I think we are in for one of the greatest Ryder Cups of all time in a few years’ time, and I just hope I can be here for that.”