McDowell came from one shot behind with two holes to play to post a closing three-under par 69 and despite what was a tap-in bogey at the last he won by a stroke with an 18-under par tally in very hot conditions on the Caribbean Island.

The win is McDowell’s fourth PGA Tour triumph and his 15th win worldwide but of more importance his first since November 2015 when he captured the Mayakoba Championship in Mexico.

Unfortunately, the small US$3m prize purse means he does not qualify for next week’s Masters.

“It’s difficult to win on the PGA Tour…I was here on a mission and I was here motivated and that attitude was going to be very, very important this week,” he said. 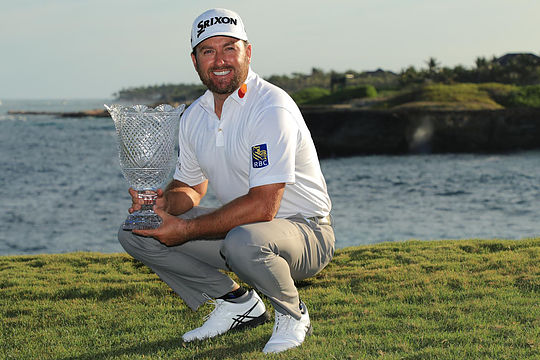 “This win has been coming and I feel like I have been playing pretty well for the last 12 months but I have not been turning my good weeks into big weeks.”

For a third day in succession McDowell raced to be four-under after seven holes but a bogey from a greenside bunker at the par-3 ninth checked his progress as he headed into the ‘business end’ of the event.

The birdies then dried-up for McDowell with those behind beginning to overtake.

First was Texan Chris Stroud who had matched McDowell’s 64 on day three with the American joining McDowell on 18-under par with a birdie on 14.

Canadian McKenzie Hughes made it three atop of the board when he birdied 15 moments after a birdie at the 14th.

Stroud, who was in the last group with McDowell, broke clear to 19-under par when he birdied 15 leaving McDowell and Hughes a shot behind.

But Stroud opened the victory door for McDowell in missing the green at the par-3 17th and taking a bogey ‘4’ while McDowell brilliantly landed his 9-iron tee shot to some five-feet and sent his birdie putt to the bottom of the cup.

McDowell headed down the last a shot clear but with both he and Stroud made a mess of the 72nd with each posting a bogey ‘5’ though McDowell wasn’t about to complain.

McDowell headed into the final round staring at an unwanted Tour stat of having led four times after 54-holes in his career previously but failed to turn the previous three into wins.

Australia’s Aaron Baddeley had a chance ay victory today but a lacklustre 1-under 71 saw him finish four shots off the pace at 14-under and in equal 7th place.

Matt Jones (T18), Curtis Luck (T52) and John Senden (T67) all made it through to the weekend while Cameron Davis and Robert Allenby missed the cut.