(Royal Greens Golf Club, Saudi Arabia:) Graeme McDowell has canned a Caribbean family holiday and now has Augusta, Georgia on his mind in muscling his way back into the world’s top-50 after his Saudi International victory.

McDowell ended a five-and-a-half year, 2037-day European Tour winless drought in posting a final round 70 to win by two shots from defending champ Dustin Johnson with a 12-under par tally in bright but very windy conditions on the course laid-out along the Red Sea.

In his tournament debut, Phil Mickelson earned his appearance fee finishing three shots back at 9-under alongside Gavin Green and Thomas Pieters.

The win, McDowell’s 11th European Tour title along with a 15th worldwide since 2002, will see the Northern Irishman jump from 104th to around 47th on the World Rankings.

And if McDowell remains inside the top-50 by March 30th then he will be receiving his first Masters invitation since 2016.

Though the now 40-year old had to be reminded of his last European Tour victory, which came back in 2014 with his successful defence of his French Open title in Versailles.

“I didn’t realise it had been quite that long here in Europe so I’m very excited, and I’m very relieved,” he said.

“My big goal this year was to be back in the Top-50 in the world, back competing in the big tournaments.” 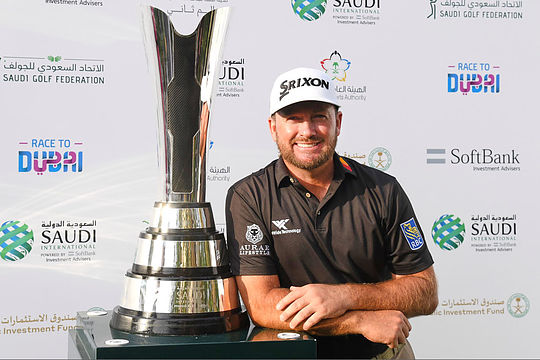 “I’m very excited that it’s happened a little faster than I expected but hopefully it’s laying some foundations down for having a big year.”

Twelve months ago this week, McDowell returned to competition at the AT&T Pebble Beach Pro-Am from a long wrist injury lay-off, and with his wrist still heavily strapped for his first event of 2019, and ranked a lowly 246th in the world.

Also, G Mac had ended 2018 having also lost his full PGA Tour card and was in Pebble Beach on an invitation. However, a few weeks later, and with his wrist duly healed, he sensationally regained full PGA Tour membership in winning the Corales Puntacana Resort and Club Championship in the Dominican Republic.

In August last year he teamed-up with new coach, Kevin Kirk and their work together saw McDowell superbly kick-start 2020 with a T4 in just his second Tour event in the Hawaiian Islands.

Now a further two tournaments on, and McDowell’s won again on the European Tour.

First reward for McDowell was a €529,337 first prize cheque to take his European Tour earnings to just a few Euro short of €21m and he moves into third place on the Race to Dubai while his win has seen him move only to 23rd on the Ryder Cup points table.

His victory has also earned him a start in the February 20th commencing WGC – Mexico Championship and hopefully a first drive in April down Augusta National’s Magnolia Drive since 2016 and where, in 10 Masters appearances, his best finish is T12 in 2012.

“I want another chance at a major championship on the back nine on a Sunday and this win is all the steps,” he said.

“It’s a lofty goal and there’s going to be a lot of steps between here and now, but this really gives me the kick-on that I need, of.”

Last week’s Dubai Desert Classic winner, Lucas Herbert, was the best of the Australians in a share of 27th place with Maverick Antcliff equal 52nd.