Graeme McDowell celebrated his second success in three tournaments to become the first Irish-born winner of the Volvo World Match-Play Championship in Bulgaria.

McDowell helped put the former Communist stronghold on the golfing map with a tactical 2&1 defeat of Thailand’s Thongchai Jaidee in superb cloudless conditions at the Thracian Cliffs course.

The new world number seven had been 2 down after four holes but seized on the 43-year old former Thai paratrooper tiring near the turn and then displayed the stubbornness and determination that’s made him such a feared Ryder Cup competitor.

McDowell won three of four holes from the 12th to close out the match with a par on the 17th and a year after losing to Nicolas Colsaerts in last year’s final in Spain.

McDowell, who captured his second event in three starts, now joins some of the greats of the game in getting his name on the gleaming trophy but the very first from the Emerald Isle after Padraig Harrington had lost the 2001 final. 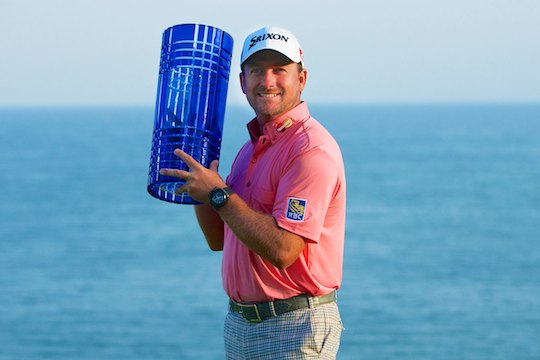 “It’s always fun to be the first Irish name on any trophy and the names on this trophy are just phenomenal Els, Westwood, Montgomerie, Ballesteros, Norman, Lyle, Faldo, Player and Palmer,” said McDowell who had been runner-up in Spain a year ago.

“It’s just crazy stuff the names of the greats in the game on the trophy and to thrust yourself into that company is pretty special, and Irish golf is certainly carving niche in world golf at the minute.”

“There’s also a curly-haired kid who is pretty good, so anytime I can do something before he does it is never a bad thing, and the good thing is that every time he looks at the US Open trophy he’s got to look at my name above his.”

McDowell had beaten South African Branden Grace 3&2 in the morning to reach the final and walked off the 17th some four hours later still looking razor-sharp having played 99 holes over the four days.

McDowell collected a first prize cheque for €800,000 that’s taken him to the lead in the Race to Dubai.

And after declaring at the prize presentation ‘I’ve also managed to discover Bulgarian red wine and it’s very, very good’ he was soon handed a litre bottle of local Terra Tangra estate red.

McDowell’s only fear now heading to this week’s flagship BMW PGA at Wentworth is his results in recent tournaments.

“But then my next tournament after Wentworth is the US Open, so I’ll be happy to take right now missed cut and win (smiling).”

But after one of the best starts to a new season in his 11-year pro career, McDowell’s caddy of seven years, Ken Comboy is concerned McDowell could head to next month’s US Open with his expectations sky high for a US Open success.

McDowell responded: “Ken is right is say that as he’s very smart and he’s seen great players go into Majors over-expecting and under-delivering, and that’s why he’s been on my bag next month for seven years and for that reason.”

“So I’ve now got one event before the US Open and you could say I’m in the form of my life, and going to a US Open where my record speaks for itself, but you can never, never, ever get ahead of yourself in this game.”

“As soon as you think you have it nailed, this game kicks you hard and I have learned to realise that and looking to control my expectations going into the Majors.”

Jaidee was very gracious in defeat and securing the biggest prize cheque of his European Tour career of €400,000 and some €28,000 more than victory in last year’s Wales Open.

The Thai golfer, who had defeated South African Branden Grace to reach the final, has jumped 24 places to seventh on the Race to Dubai.

“I am very happy and had a very good week,” said Jaidee.

“I made only one mistake in the final on the 14th hole after a poor drive. But it was a good tournament for me. My game is very solid.”

“I came here of course to win and to come second I am very proud and satisfied, as it is a good result for me.”

“I did get very tired this afternoon but more importantly I enjoyed the tournament, and I enjoyed coming here for a first time in my career to Bulgaria.”