Graeme McDowell created a career first and heads into next week’s British Open in the best possible manner after virtually being handed on a plate his successful defence of the French Open in Versailles.

McDowell was all set to prepare for a play-off with Kevin Stadler, who had led for the first three days, but the American missed a short putt at the final green that would have sent continental Europe’s oldest Open in to extra time. 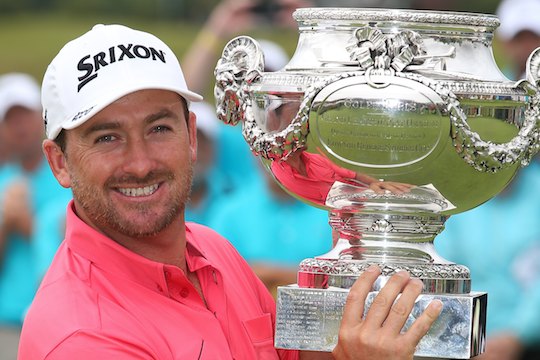 McDowell had come from eight shots behind in wet and windy conditions to bogey the last in a final round 67 for a five-under par total on the National course.

With his father Kenny beside him, McDowell was glued to the TV watching anxiously as Stadler needed a par at the last to send the event into extra time, and when Stadler found the 18th green in regulation and putted up to just three feet, McDowell headed for the practice putting green.

However word soon came to hand Stadler had missed his par putt to shoot a five over par 76 and gift McDowell a repeat French Open title victory.

“It’s not really the way you want to win but we’ll take it,” he said.

“But I am very surprised as I have to say midway through my second glass of red wine last night I was very disappointed with my back nine effort on Saturday, so I didn’t think I would first be maybe in a play-off and second standing here now again holding the trophy.”

“I feel very fortunate as Kevin Stadler is a great, great player.”

“When I left the room having given him that short putt and really didn’t expect to see him miss that.”