After waiting anxiously in his hotel room, Paul McGinley headed downstairs to find himself being appointed the 2014 European Ryder Cup captain.

Players Committee chairman, Thomas Bjorn revealed the names of five players – the Scottish trio of Sandy Lyle, Paul Lawrie and Colin Montogemerie along with Spain’s Miguel Angel Jimenez – who were all considered by the 12-man committee. 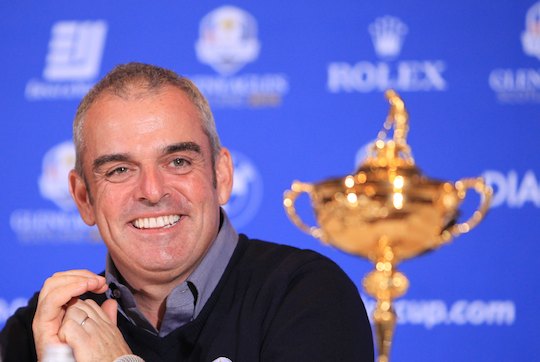 However it was McGinley’s name emerging on top of the voting deep within the St. Regis Hotel in Abu Dhabi.

So with the Committee views strongly in McGinley’s favour he was asked to leave the room, so McGinley returned to his room on the seventh floor of the hotel where he phoned fellow Irishman Shane Lowry and McGinley’s younger brother, Michael to join him.

“I went to my room where I had a couple of oatmeal cookies and a bottle of water and watched the time go by very slowly I have to say,” he said.

“But I am absolutely thrilled and delighted to accept this honour to lead the European Team and obviously the strongest set of players we have had in the history of the European Tour, so to be leading the cream of the crop into a Ryder Cup is a huge honour.”

“To be quite honest it is a very humbling experience to be sitting here as the new European Captain and I am really looking forward to the whole of experience as captain.

“I have been there many times as a player and also as a vice-captain and I am really looking forward to this opportunity.”

Tour CEO George O’Grady, who sat in on the decision process, remarked on McGinley’s appointment

“It’s a wonderful achievement for Paul and reflects his great service to the European Tour,” said O’Grady.

“His standard of leadership in the Vivendi Seve Trophy and the standard of his character.”

Unlike, Monty and also Darren Clarke, McGinley had purposely remained ‘low-profile’ in the lead-up to the captaincy decision and he says it’s something that has now worked in his favour.

“I watched, just because I watch, it’s amazing what you can learn when you listen and don’t talk and that’s what’s happened,” said McGinley

Monty was among the first to shake McGinley’s hand while one of the first formal messages of congratulations was from boyhood idol and now 2014 USA rival captain, Tom Watson.

“I congratulate Paul McGinley upon his selection as the next European Ryder Cup Captain and anticipate that his passion and love of the event will transfer to being an outstanding leader of his team in 2014 at Gleneagles,” said the 63-year old eight-time Major winning Watson.

“Paul has been connected to four winning European Ryder Cup Teams and is an outstanding representative of European golf. I look forward to sharing the stage with him as we make our journey to Scotland.”