England’s Ross McGowan ended an 11-year, 15-day Tour drought in holing a 20-foot birdie putt to win by a shot with a 20-under par tally and capture his first title since the 2009 Madrid Open.

McGowan had, for a second day running, eagled the par-5 sixth hole but the standout shot of his round was holing a greenside bunker shot for birdie at the par-4 16th that proved to be the difference he needed at the end of the day. 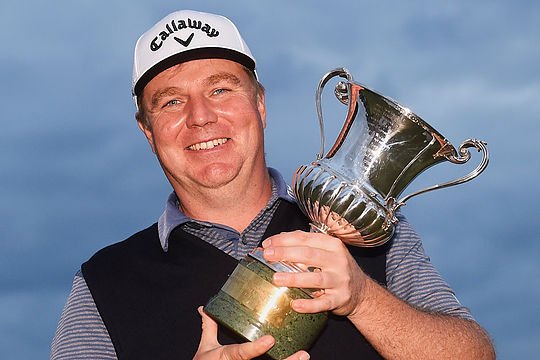 “My head is going full blast at the moment,” said McGowan.

“Obviously I’m very happy, not happy with the way I played particularly but I got the ball in the hole which in the past has been my nemesis, so it was nice to be able to do that this week.”

“When I hit the bunker shot on 16, that came exactly how I saw it and it obviously went in and the putter has been good all week, so I felt like if I put it to six or eight foot at 18 I had a good chance of making birdie.”

“To be honest, I wasn’t thinking about anything over that putt. I just looked at the hole, it was left edge, and obviously the rest is history.”

Fellow Englishman Laurie Canter, who led the event for three rounds, signed for a disappointing last day level par 72 to share second at 19-under par with Belgium’s Nicolas Colsaerts, who birdied two of his closing three holes in a score of 68.

Canter and McGowan had been tied for the third day lead on 19-under par and both players were struggling in the final round but more so Canter, who bogeyed his seventh and eighth holes and also the 14th and 15th. Then in needing to birdie the last to force a play-off, his putt rolled by the rightside of the hole.

“It was horrible. The front nine, I actually felt like I played alright to be honest. I hit the ball nice for most of the day, but I was just exposed on the greens and around the greens. I just didn’t feel right, didn’t feel comfortable all day,” said Canter.

“I felt like I needed to get forward and then suddenly the bogey at five, I just got caught up in it. It’s disappointing”.

Maverick Antcliff was the only Australian to make it through to the weekend finishing in a distant share of 55th place. Jason Scrivener and Wade Ormsby missed the cut.