American Max McGreevy carded a bogey-free, 8-under 64 on Sunday to win the Price Cutter Charity Championship by one stroke at 21-under on the Korn Ferry Tour.

McGreevy, 25, held off José de Jesús Rodríguez, who finished the week in solo-second at 20-under. 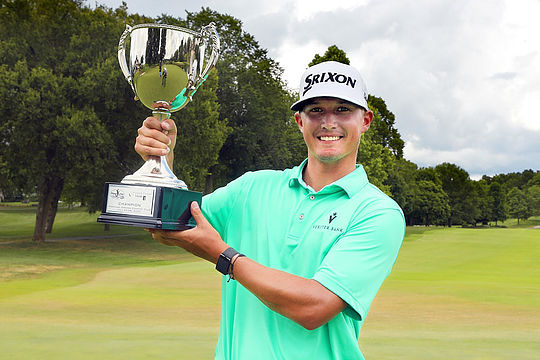 “I’ve never won a four-round event before,” said McGreevy, who opened the week with a 64 before entering Sunday five shots back. “To be able to put something together on the final day means a lot to me.”

The win was McGreevy’s first on the Korn Ferry Tour in his 28th career start and 12th in 2020 and his second as a professional having won the 2019 Guangzhou Open on the PGA Tour China.

McGreevy’s win moved him up from 40th to eighth in points standings, well inside the desired top-25. He had missed eight of eleven cuts before Sunday’s win, though he did have three top-15s, including a T3 in Panama in February to his credit.

In 2018, McGreevy made seven cuts in 16 starts during his rookie season on the Korn Ferry Tour. After failing to retain his playing status, he travelled overseas to play on the PGA Tour Series in China. In 13 starts, he made 13 cuts and added a victory and nine top-10s to play his way back onto the tour.

As an amateur McGreevy played for University of Oklahoma winning three individuals titles and was a two-time All-American as well as an Academic All-American before turning professional in 2017.

Jamie Arnold was the best of the Australians recording a top-25 resulting finishing at 13-under for a share of 21st position.

The Korn Ferry Tour travels to The Club at Indian Creek in Omaha, Nebraska, for the Pinnacle Bank Championship.