Blake McGrory’s stellar form at the recent New Zealand Amateur Championship in Christchurch where he secured a 3rd place Medal finish and made the top-16 in the match play has continued this week.

The 2007 Lake Macquarie Amateur champion fired a 1-under-par opening round at the Queensland Men’s Stroke Play Championship at Pacific Harbour Golf and Country Club to lead by a stroke over Adam Mollis. 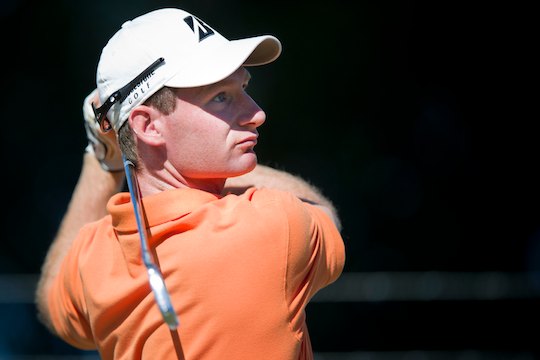 Mollis carded even-par round in challenging conditions to be in outright 2nd position while Wynnum’s Sam Daley is currently in 3rd place at 1-over-par.

Tournament favourite and current Australian Amateur Stroke Play and Australian Boy’s champion, Cameron Smith, opened with a 2-over-par 74 and is three strokes behind McGrory in 4th position alongside Daniel McGraw and Tim Hyland.

Tim Hart, runner-up at last year’s Queensland Amateur to Brett Drewitt, is in 7th position after a 3-over-par, 75, with Kevin Marques, Nicholas Smits and Maverick Antcliff.

Only one player managed to break par as the 156-strong field battled strong winds and at times driving rain around the exposed Pacific Harbour layout, which is located on Bribie Island about an hour’s drive north of Brisbane.

“I’m happy to have not posted a big opening number,” said Hart following his round.

“It was incredibly tough out there and the scores reflect that. It’s always good to get off to a reasonable start and to be just three behind the leader after a day like that is pleasing.”

With the conditions set to remain unchanged for the second round, the top-50 cut mark is predicted to be at 16-over-par following Thursday’s second round.

The top-16 following Friday’s 36 hole final round will qualify for the Queensland Men’s Amateur Championship to be played at Arundel Hills Golf Club from the 3rd May, with the 36-hole final scheduled for Friday week.