Rory McIIroy fired his second straight 6-under-par 65 for the 36-hole lead at the Deutsche Bank Championship Play-offs in Boston.

The 2012 US PGA Champion leads by a shot over Louis Oosthuizen. 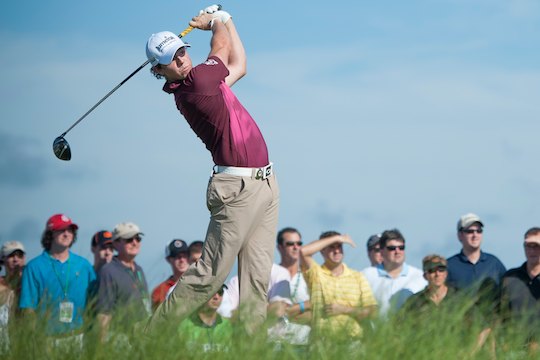 Tiger Woods and Ryan Moore, who both shot 68 on Saturday, trail by 2 heading into Sunday’s third round.

“I got off to a nice start and sort of just kept the momentum going,” said McIlroy, who is 12 under for the tournament.

“I felt like I drove the ball a bit better today and hit more fairways, which gave me some more opportunities to make birdies, and I was putting well enough to take a few of those.”

Player of the Year and the FedEx Cup Playoff title are clearly in McIIroy’s sights.

For the next two days at TPC Boston, he could take hold of these playoffs.

A win here also would signify his ascendancy to the world number one and put to rest the critics, who earlier in the year were pointing to McIIroy’s apparent ‘form’ slump.

All seven Australians made the cut with Greg Chalmers (68) the next best at five under while Adam Scott (69) snuck inside the top 20 at four under.

Geoff Ogilvy (-1) all but secured a place in the next round of the playoffs by making the final two rounds.

Aaron Baddeley and Jason Day have put themselves under pressure.

The pair needed to finish inside the top-20 to guarantee a place in the BMW Championship next week.

Day dropped three shots late in his round to card a two-over 73, sending him back into a tie for 38th at one-under.

Baddeley was a shot worse, posting a three-over 74 to slide down 36 spots into a tie for 53rd at even par.

Marc Leishman rounds out the Aussie contingent, sitting in a tie for 60th at one-over par.