The question came right out of the blue from the Daily Record’s Euan McLaren and certainly caught European Tour media officials off guard, with McIlroy apologising afterwards for letting the news slip. 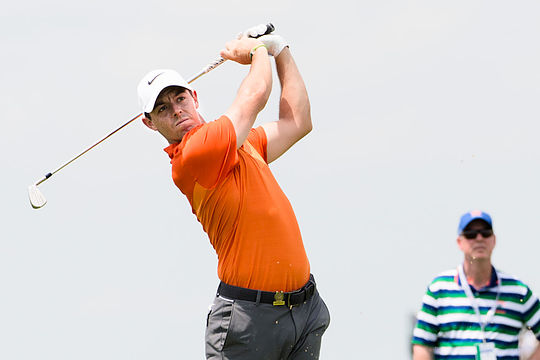 “Sorry Gibbo,” he said smiling at the Tour’s Michael Gibbons realising he had let the proverbial cat out of the bag in indicating he would be competing.

The news comes after we broke the news in recent weeks that Adam Scott, Henrik Stenson, Matt Kuchar and also Rickie Fowler will be competing in the $US7m event.

It will be the first appearance in the event for McIlroy since he played at Royal Aberdeen in 2014 while an ankle injury ruled him out two years ago at Gullane.

“Which is great, great links round. And then contemplating a couple — another one in the summer.”

“But we’ll see how it goes I guess. If I’m able to knock off a couple of big ones, that schedule changes a little bit, but I’m definitely going to play Scottish.”

McLaren jumped in with a follow up question asking McIlroy what he knew about Dundonald Links.

“I don’t know much about Dundonald. I know it’s close to Troon,” he said.

“That’s really about it. I know I can drive there. Have to get the boat from Larne to Troon will be fine.”

The news of McIlroy competing at Dundonald will certainly see a big rise in ticket sales to the event.