McIlroy can list all of Woods golfing achievement and the superstar American set the benchmark for the likes of McIlroy to follow. 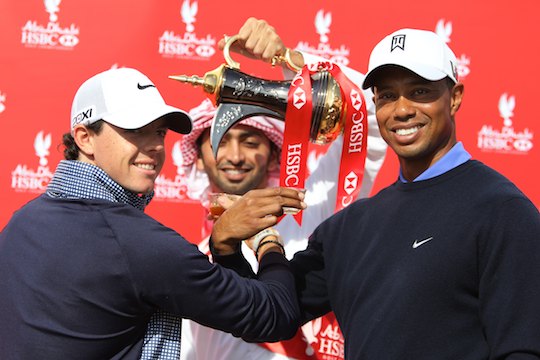 “This generation coming through, we grew up watching Tiger Woods and he was really the benchmark for us,”said McIlroy in an interview with local Dubai radio station ‘Dubai Eye’.

“To see what he’s done in the game and to see how successful he was, he really changed the sport. He made it younger, he made it cooler and he made it more athletic. We all wanted to emulate what he did.”

“I could tell you all his achievements, when he won there, where he won them, where I was when he won them. I was a huge fan of Tiger, just like a lot of my generation were. It was definitely him that set the benchmark for us that we’re trying to achieve now.”

Mystery surrounds when, if ever, Woods will return to the competition fairways as he recovers from two back operations and then also follow-up treatment.

In the 40-year old’s absence it’s been the likes of current World No. 1 Jordan Spieth along with Australia’s Jason Day, Rickie Fowler and McIlroy who are taking the ancient game to newer heights.

Ironically it was early in 2007 when Tigermania again gripped McIlroy who got up close to Woods when he assisted an accredited photographer in carrying his lens and walking inside the ropes following Woods for all 18 holes at the Dubai Desert Classic.

Of course, Woods has not won a Major since his 2008 U.S. Open triumph while his last tournament victory was in the 2013 WGC – Bridgestone Invitational. Co-incidentally Firestone Country Club was also fellow World No. 1 Greg Norman’s last PGA Tour success in 1997.

With McIlroy’s admiration of Woods so high it is little wonder he misses interacting and competing alongside Woods.

“Selfishly, it’s not a bad thing at the minute that Tiger isn’t competing with us,” he said. “But I’d love to see him, as a golf fan myself, just have one more crack at it.”

“If he could get healthy first and foremost which is a big obstacle to overcome. If he can do that and then piece his golf game back together I’d love to see him get another year or two at it because it would be great to see him go out on some sort of a high.”

And Woods spoke of the intimidating ‘persona’ Woods brought to the game and evident in claiming 102 victories around the globe since turning pro at the end of 1996.

“Tiger gives off this persona of being quite intimidating,” admitted McIlroy.

“I’d love to achieve what he’s achieved, but then again the life he’s had to lead over the past 10 or 15 years is very, very difficult. He can’t go anywhere. It would be tough to live that life, so I can see why he is so guarded.

“But once you gain his trust he’s great. He’s great fun both on and off the golf course. I only live 15 minutes away from him in Florida and we play some casual rounds together. He’s just a normal guy.

“I think he craves that normality in his life because his life has been so abnormal for so many years so in that way. I’m lucky I have a grounded life and I can do normal, everyday things and I can feel he craves that.”

“He’s now with his kids trying to be the best father he can be. He’s putting all his effort into that. I respect him for that and that’s why hopefully one day he can come back and have another go at trying to win majors and give every golf fan what they want to see.”