Rory McIlroy has taken himself off social media after publicly revealing his distaste over “tweets” mid last month by Australian-born and fellow pro golfer, Steve Elkington.

Elkington tweeted on June 17th that he felt McIlroy was “so bored playing golf…without Tiger the threshold is prolly 4 majors with 100mill in bank”. 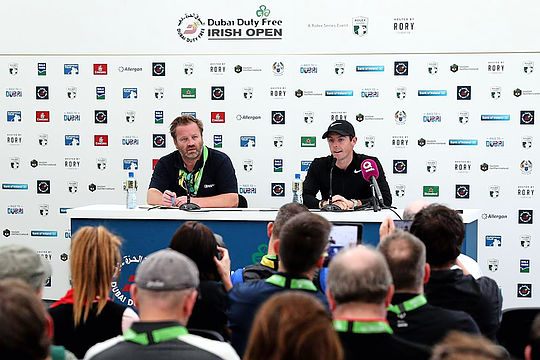 A Twitter spat then followed with McIlroy quickly responding to the 54-year old Houston-based Elkington: “@elkpga More like 200mil…not bad for a “bored” 28 year old…plenty more where that came from”.

And McIlroy attached to his tweet an image from his Wikipedia profile listing all his achievements.

McIlroy hit back with a second tweet “questioning” Elkington’s academic background when he began a second tweet with the word “New” and McIlroy correcting him saying as the word is spelt “Knew”.

McIlroy had spoken “off the record” about the controversy during the recent Travelers Championship in Connecticut but found himself drawn back the matter ahead of hosting and also defending Thursday’s Irish Open.

McIlroy has some 3.15m followers on Twitter but since Elkington’s tweets on June 17th the Northern Irishman has posted just three tweets and one of those was to congratulate good friend, Brooks Koepka in winning at Erin Hills.

In contrast, Elkington is a “serial twitterer” with followers of 71.2k.

However, it was not the nature of the what was said by the Australian, who has lived most of his life in Houston, but that it was said by a fellow player and also a fellow winner of the PGA Championship.

“It’s not what was said. It was who said it,” said McIlroy.

“Anyone that’s been in that environment should realise how hard golf is at times, and I think that’s the thing that got to me more than anything else.”

“So, if that was written by a member of the media or something, I could let it slide, because I can sort of say to myself, they don’t really know how it is and they don’t know what you have to deal with.”

“But a former player that has won a major and been successful; that’s sort of why it got to me and that’s why I sort of retaliated a little bit.”

McIlroy indicated also he did not make the decision on his own and had been in lengthy discussions with his new wife, Erica, over the issue.

The current World No. 4 kick-started the week on Tuesday night in Belfast by hosting a Rory Foundation evening with special guest, Pep Guardiola, manager of Manchester City FC.

Guardiola then joined McIlroy, a devout Manchester United follower, on Wednesday as a member of his pro-am team.

“I was good friends with him, and then he picked the City job, so I don’t know,” said McIlroy smiling.

“But no, my relationship with Pep started at The Ryder Cup in 2012. He was there. That was sort of his sabbatical year from management. He loves his golf. He went to the Masters that year. Went to The Ryder Cup. Struck up a bit of a relationship.”

“Actually Pep and my dad, basically, walked all three days together and my dad is a huge City fan at that time he was asking, Pep, when are you going to come manage City, and obviously he got his wish four years later I guess. That’s how it started.”

“Then I caught up with him sort of in March or April this year.”

“I actually used a facility, the Manchester Institute of Health and Performance, to do some testing, and it’s right beside City’s training grounds.”

“So, I caught up for lunch with him and asked if he would come over; we would love to have him and to play in the Pro-Am and obviously to have a chat last night, which he did. He’s very generous with his time. I think everyone enjoyed it.”

“He told some great stories and it was a great night for, as I said, a very worthy cause and we’re very grateful for him to coming over and doing that.”