Rory McIlroy has challenged golf fans to retrieve a 3-wood he hurled deep into bushes off the ninth tee during Monday’s finish to the Northern Trust in New Jersey.

McIlroy made the confession of club-throwing ahead of this week’s BMW Championship and after his lowly 43rd finish in the opening event of the lucrative Play-Off Series at the Liberty National course in the Garden State. 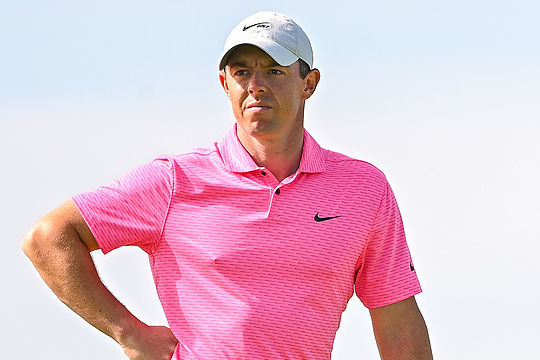 “I tried to throw my 3-wood off the ninth hole at Liberty National onto the New Jersey Turnpike, on Monday.”

“I may not have reached the road but it’s well into the trees, so if someone wants to go get themselves a 3-wood there is one in there somewhere”.

News of the incident in the Storm Henri affected event only surfaced when McIlroy was quizzed why he had spent so much time on the practice range Tuesday working with his 3-wood at the host Caves Valley course in suburban Baltimore.

He said: “I was going through a bunch of new heads and shafts and so on with both my driver and 3-wood, and that’s what I was doing here on the range.”

“I feel like I have now landed on a good driver and I’ve now got a pretty good 3-wood, too.”

“So, that was the purpose of yesterday’s long practice session.”

Then US Presidential candidate Donald Trump had a diver retrieve the club and it’s now on display in the Pro Shop at Trump Doral in suburban Miami.

McIlroy will tee off alongside Sungjae Im and Billy Horschel later tonight. At 28th in the FedExCup Standings, the 32-year-old will need to improve his form this weekend if he is to avoid not making the top-30 for next week’s Tour Championship.