In the space of five days Rory McIlroy has gone from the front page of the world’s newspapers to the lead story on the back page with his remarkable victory in the BMW PGA Championship.

McIlroy came from seven shots behind at the start of the final round of the European Tour’s flagship event to birdie the closing two holes in a round of 66 for a 14-under par tally. 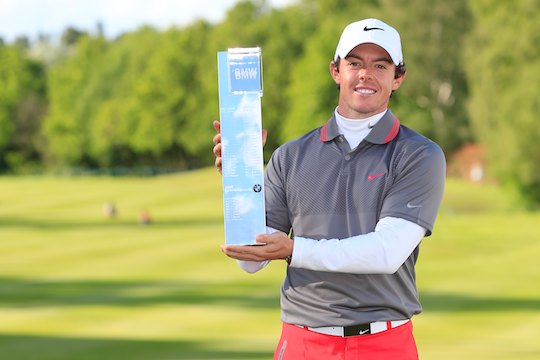 He then waited patiently before fellow Irishman and good friend Shane Lowry birdied the last to finish on 13-under par and also wondered if Thomas Bjorn, who went into the last day leading by five, along with former double BMW PGA winner Luke Donald would eagle the last to force a play off.

But when Donald found the water guarding the green and Bjorn was on the green in three and knowing he could not win, McIlroy could finally claim the Tour’s flagship event.

It is McIlroy;’s 12th success in his professional career, the sixth on the European Tour and also his first pro career success on European soil.

However it was a bizarre victory played out on a sunny Spring afternoon in leafy Surrey.

Five days ago, McIlroy visited the Wentworth Media Center near in tears after having released a statement earlier on Wednesday to confirm the breakdown of his relationship with Caroline Wozniacki.

Today he returned to the same seat in the Media Center and still slightly subdued despite the applause and the out-pouring of support for the 25-year old.

“I knew coming in here I was playing well and with some top-10s coming in the Masters, Wells Fargo and the Players in the States, and while I struggled a little bit on Friday I played great over the weekend,” he said.

“I was a little fortunate today as some of the guys ahead of me made some mistakes and I took advantage of that.”

“My caddy J.P. (Fitzgerald) set me a target today of 15-under par to get to and while I didn’t quite get to 15-under 14 under was enough, so I am happy with that, and happy to have this trophy.”

And with Lowry also present at the victory ceremony, McIlroy congratulated his former management stablemate but still good friend on his achievement.

As well, McIlroy is the first Irishman since Harry Bradshaw in 1958 to win the BMW PGA Championship.

“To be the first Irishman in over 50 years to be standing here is great, so hopefully I can come back and give it another go next year.”