McIlroy confirms he will return at Mexico City

McIlroy will have been side-lined for close to six-weeks when he tees it up on March 2nd in Mexico City after suffering a stress fracture of a rib, which he attributed to his intense off-season practice program working with new clubs. 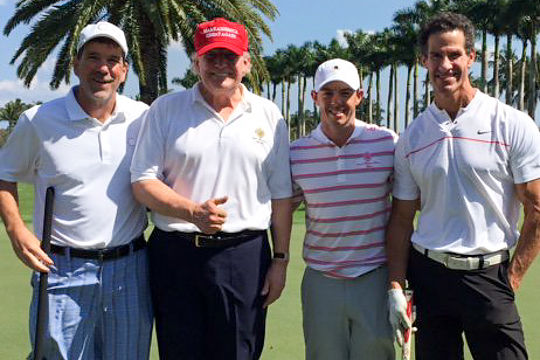 However, the injury was not diagnosed until after McIlroy lost out in a play-off to England’s Graeme Storm at last month’s thrilling South African Open play-off showdown.

The four-time Major winning McIlroy champ has been back on the practice range and working hard on his game at the exclusive Bears Club close to his Palm Beach Gardens residence in Florida.

He’s ruled out contesting this week’s PGA Tour Honda Classic, just a short drive from the Bears Club, and instead his manager confirmed it is all systems go to return to competition in the Mexican capital at the US$9.75m WGC event.

“Yes, Rory intends returning for the WGC in Mexico and looking forward to getting back to competition”, said his manager.

And it was clear McIlroy’s game is getting back to normal after being approached by US President Donald Trump to play 18 holes on Sunday at Trump’s exclusive course.