McIlroy crowned No. 1 on both sides of the Atlantic

Rory McIlroy may not have captured the season-ending DP World Tour Championship but he has become only the second player to be crowned as European Tour and FedEx Cup No. 1 in one season.

McIlroy ended his season in outright fourth place on 16-under-par with England’s Tyrrell Hatton and Alex Noren sharing second place on 18-under. 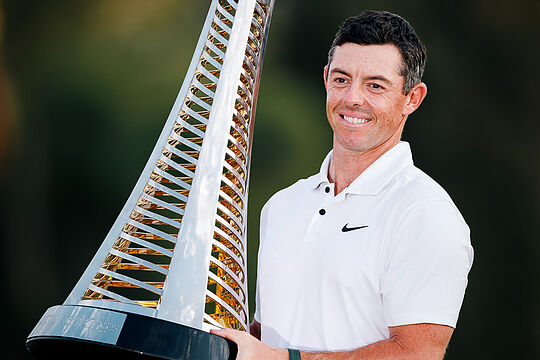 The current World No. 1 ranked McIlroy arrived in Dubai quietly-confident of making it a DP World Tour double however he was always playing catch-up following his opening round of 71. Though you can never question McIlroy’s determination as he brilliantly ended Friday’s second round with an eagle ‘3’ and then produced an equal best score of 65 on ‘moving day’ that edged him to within two shots of Rahm.

On the last day of the final event of the 50th anniversary DP World Tour year Rahm was too strong, as evident when he birdied his opening three holes, in eventually recording a last day 67 to win by two shots at 20-under and recording a third DP World Tour Championship success, and end his season as DP World Tour No. 3

Kiwi Ryan Fox, a double Tour winner in 2022, was officially in second place on the Race to Dubai after a closing 68 for a share of 19th place at 5-under-par.

McIlroy’s effort, not only matched Henrik Stenson in ending a season as both the DP World Tour and PGA Tour FedEx Cup winner in 2013, it is also the fourth occasion, and at the end of a 15th full season in the pro ranks, the Northern Irishman has ended a DP World Tour year as No. 1 and winner of the Harry Vardon trophy.

“I am very proud of myself and, in fact, Harry and I were talking going up the last fairway as it seemed like a long time since San Antonio and the Texas Open, and in the week before Augusta this year, when I was struggling a little bit and I made a couple of tweaks with my game and my equipment, and went to a new golf ball,” said McIlroy.

“It seemed like just after that my year turned around and got a ton of momentum at the Masters and I just continued from there.”

McIlroy has some three weeks away from formal competition ahead of “The Match” taking place on December 10th when he and Tiger Woods take on Justin Thomas and Jordan Spieth.

The seventh edition of the event will take place at Pelican Golf Club in Belleair, Florida, and feature four of golf’s brightest stars going head-to-head in a 12-hole competition.