McIlroy cruises to victory at US PGA

Rory McIlroy has cruised to his second major title by a record eight shots at the US PGA Championship played at The Ocean Course at Kiawah Resort in South Carolina.

The 23-year-old McIlroy, who started the final round with a three-shot lead, carded a flawless 6-under-par 66 for a 13-under-par total and a record winning margin of eight strokes over England’s David Lynn. 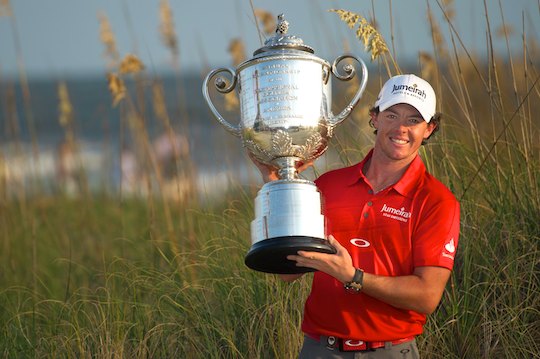 “Yeah, it’s a nice record to have,” said McIIroy about breaking Jack Nicklaus’ record for the biggest margin of victory in the USPGA Championship.

“I don’t really care if I win by one or if I win by eight. I just want to win and I was able to do that today.”

McIlroy, who reclaims the world number one position, becomes the fifth youngest player in history to win two majors.

“To win my second major and get to world number one all in the same day is very special,” said McIIroy.

“Now I have had a little taste of it, and I have switched back and forth with Luke [Donald] a couple of times, it’s a great bonus on top of an already great day.” 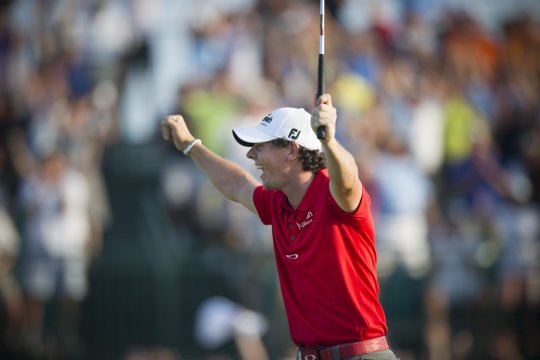 Geoff Ogilvy was the best-finishing Australian in the final round, returning to the clubhouse with a 70 on the final day to finish 2-under, tied for 11th with countryman Adam Scott, American Tiger Woods and Graeme McDowell.

Scott finished his third round this morning with a 2-under-par 70 to be four from the leaders moving into the afternoon round.

A final round of 1-over-par, 73 – which included three birdies, two bogeys and a double bogey – put an end to Scott’s chances.

For Scott, it was another major chance gone begging although to be fair, this time he faced a storming Mcllroy.

“I just never really got it going,” said Scott.

“You know. Rory had it in his hands today, and put it out of everyone’s reach. It is a hard golf course and it was a grind. I didn’t play my best and that makes it hard to get around.”

Marc Leishman finished the next best Aussie with a respectable tie for 27th position at 1-over-par, a stroke better than John Senden and Greg Chalmers, who finished at 2-over-par and in a tie for 32nd position.

McIlroy has proved his doubters wrong by storming to his second major – and at a younger age than Tiger Woods.

He had taken a three-shot cushion into the final round after finishing off his rain delayed third round with 67 and by the turn never looked to be threatened with the championship there for his taking.

“Yeah, I don’t think I could have answered it in any better way,” said McIIroy about his critics who have scrutinised McIIroy’s personal life and the time he has spent on the course.

“To be honest, it did motivate me. I did want to go out there and prove a few people wrong. That’s what I did. It took me all of four weeks to get me game back in shape and get out of my mini-slump, and this is the result.”