Rory McIlroy has arrived in Hawaii for a maiden appearance in the Sentry Tournament of Champions declaring the European Tour to be ‘one-sided’.

And in joining eight others making their debut in the winner’s only event including Open Champion, Francesco Molinari, we are no closer to knowing whether McIlroy has chosen not to rejoin the European Tour despite confirmation European Tour CEO, Keith Pelley travelled to Belfast to talk with McIlroy following his shock remarks at the 2018 season-ending DP World Tour Championship. 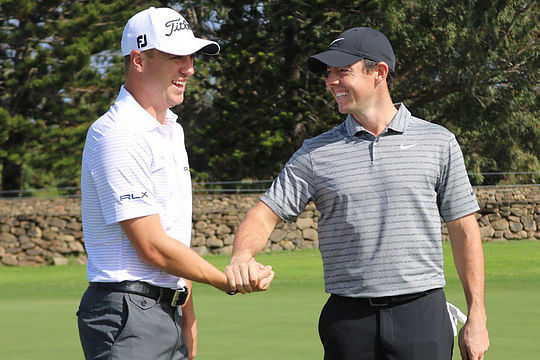 Kelley was no doubt concerned, as he had revealed straight after competing in December’s Hero World Challenge in the Bahamas, that should McIlroy not continue his European Tour membership there would be ‘implications’ in the years ahead should McIlroy wish to be considered for a European Ryder Cup Captain.

But in speaking with Association Press we are still left guessing what McIlroy’s intentions are in relation to rejoining the Tour or not.

Yes, McIlroy has spoken again of his desire to play more in the States but then we got that line from the four-time Major winner out in Dubai.

“My life is here,” he has now repeated to AP.

“I have an American wife. I live in America. Honestly, I enjoy it here more. The way of life is easier. The weather. The convenience. You go to Europe and get paid a nice amount of money to start the year. I’ve done that for a decade. I want to switch it up. I’ve done it for 11 years, so I may as well do something a little different.

“I want to play against the best players in the world. “I get a buzz from that. I’d much rather go down the stretch against Justin Thomas or Dustin Johnson. I’m not putting anyone down in Europe, but the depths of the field and everything is just that bit better over here. It’s what everyone is striving for. It’s why Francesco Molinari is here this week. It’s where it’s heading.”

The best players outside of being born in the States have been gravitating to the PGA Tour since the 50s and 60s and McIlroy is no different to the likes of Greg Norman, Nick Price, Isao Aoki, Nick Faldo, Sandy Lyle and Bernhard Langer in his desire to play against the best on golf’s greatest stage.

And just like Norman, Faldo and co he found his golfing feet on the European Tour before taking that big step to play full-time on the opposite side of ‘The Pond’.

But then as AP rightfully points out efforts by the European Tour to match the States in terms of prize-money, and the introduction of the eight Rolex Series (Seven events with prize-money of $7m and culminating with the $8m decider at the DP World Tour Championship), has resulted in very lop-sided events.

You only have to look at last year’s Italian Open and the second Rolex Series event of 2018 and there was just one top-10 ranked player (Francesco Molinari) in the field and just two others (Tommy Fleetwood and Alex Noren) teeing-up in Turin.

That same week in the States it was more a scenario who was not among the top-20 in the world contesting the Jack Nicklaus hosted Memorial.

‘That’s the thing. Look, you can talk all you want about these bigger events in Europe, but you can go to America and play for more money and more ranking points.”

And what then did McIlroy get from Pelley going out of his way to travel to Belfast to meet with the Ulsterman?

“I think Keith is very much on board with what the players want, but it’s not Keith’s decision,” said McIlroy.

“He has to go back to the European Tour board. And the board and the players aren’t aligned in what they want to have happen.

“It’s not as though I’m just starting out and jumping ship.

“I’ve done my time. I’ve done everything I feel like I need to do to say, ‘OK, I’m going to make my own decisions and do what I want.’”