Rory McIlroy heads into this week’s US Open in the best possible form after successfully defending his RBC Canadian Open title in Toronto.

It had taken three years due to the stricter COVID lockdown measures in Canada since McIlroy won the 2019 event on debut and now after a sizzling closing day 62, he’s a repeat champion winning by two shots at 19-under.

McIlroy is also only the fourth player since WWII to successfully defend the Canadian Open, with victory moving him up five spots into World No. 3.

“It’s in an incredible win and to be playing alongside two of the top players in the world in JT and Tony, and all of us playing the way with did as the worst score in the group was six-under-par, well this is a day I will remember for a long, long time,” he said.

“It’s my 21st PGA Tour win and one more than someone else (Australia’s Greg Norman and CEO of Liv Golf) as that gave me a little bit more extra incentive today, so happy to get it done.” 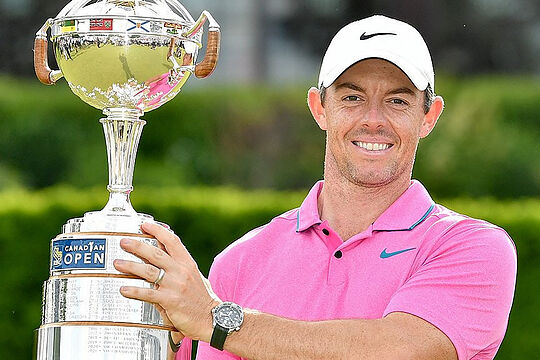 “I think also after COVID and everything I needed a complete reset. I also sort of rededicated myself to the game a little bit. I sort I realised what made me happy, and this makes me happy.”

Unlike his seven shot victory three years ago, McIlroy won the hard way, moving clear of his challenges before a 16th hole bogey put him back into a tie at 17-under with close friend Justin Thomas.

Thomas, however, found the rough off the tee at 17 and with McIlroy, after a massive 367-yard drive over trees that left him just 125-yards hole, calmly putting his second shot to three-feet for what proved a winning birdie, and then sealed victory with a 72nd hole birdie.

With Thomas walking off with a second straight bogey it was a two-shot swing in McIlroy’s favour, as Tony Finau also birdied the last in a score of 64 to grab second at 17-under and Thomas settling for a round of 65 for outright third place at 15-under.

And then there was England’s Justin Rose, who looked certain at one point of breaking 60 in posting three eagles and six birdies through 15 holes, and lying at 11-under but finishing bogey, birdie and eagle in a score of 60 to eventually share fourth place at 14-under with American Sam Burns (65).

The win is McIlroy’s 31st of his pro career, a 21st on the PGA Tour but the first time he’s successfully defended since a maiden ‘play-for-cash’ success early in 2009.

McIlroy got the final day start he desperately needed to race to a two-shot lead thanks to five birdies in his outward nine holes for a score of just 29 and move to then 16-under on the St. George’s course.

McIlroy birdied his first and fourth holes and then really put the foot down sending a booming 357-yard drive down the par-5 fifth, landing his drive some 30-yards further down the ‘short stuff’ than Finau and Thomas.

The four-time major winning McIlroy left his birdie putt right on the edge of the cup but he was dead centre into the cup when chipping-in from 32-feet for at the par-3 sixth hole and the third birdie of his round.

And he had them singing at the next, the par-4 seventh in holing a four-footer to make it four birdies in seven holes, and one birdie fewer than three years ago when McIlroy set-up his seven-shot success thanks to blistering last round 61.

The ‘Rory, Rory’ chorus continued with McIlroy landing a greenside bunker shot to just three-feet at the 10th for the sixth birdie of his day, and he made it seven birdies in 11 holes in sinking a two-footer at 11 and then holed an incredible 40-footer at the next, the par-4 12th to also make it four birdies on the trot from the ninth to 12th.

However a three-putt bogey at the par-3 13th checked his progress while a second bogey at 16 had him back tied for the lead with the two-shot turnaround at 16 when Thomas birdie and McIlory bogey.

Though there was no denying McIlroy and probably earning himself Canadian citizenship in finishing birdie, birdie in his round of 62 that was one more than the last day 61 he posted three years ago.

“Regrettably had to WD. Spine arthritis wins today. Apologies to @RBCCanadianOpen and anyone who had me in their pool, I know I’m a popular bet every time I play,” joked Chalmers on Twitter.