There’s still another four weeks until the PGA Tour gets underway again but this weekend we got our first taste of live golf with the TaylorMade Driving Relief skins match in Florida.

Unsurprisingly, it was pre-match favourites, Rory McIlroy and Dustin Johnson, who took out the honours over Rickie Fowler and Matthew Wolff, after the event was forced into extra time.

With neither team able to break the 5-hole deadlock at the 18th, the players headed to the short par-3 17th to decide the winner of the $1.1 million worth of accumulated skins in a sudden-death nearest-to-the-pin contest.

Wolff was the first to tee off and went within four metres off the hole before both Fowler and Johnson were unable to find the green.

So it was then left up to the World No.1 McIlroy to show why he is still the best in the world, leaving it pin high and just inside Wolff’s ball, to win the hole and match.

McIlroy was asked about the difference when playing for charity rather than personal gain. 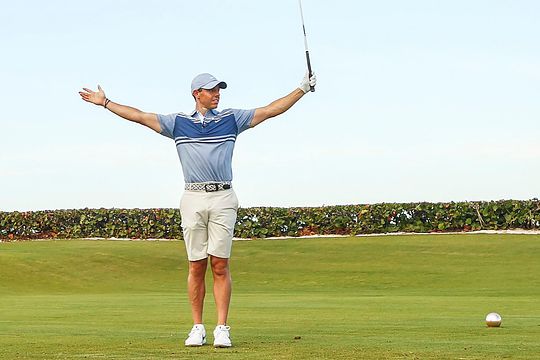 “When you’re not playing for your own money, but you’re playing for someone else and playing for another cause, it sort of starts to weigh on you a little bit.”

“I’m really proud to be a part of an event to entertain the people at home on a Sunday afternoon but also to raise money for people who really need it.”

Along with the money generated from the skins, Farmers Insurance also donated a $1 million bonus pool for birdies, eagles, aces and albatrosses with the foursome picking up seventeen birdies along the way – Fowler (7), McIlroy (5), Wolff (3) and Johnson (2).

While Wolff got pipped at the post by McIlroy, the 21-year-old showed why he is one of the most exciting young prospects on Tour after claiming both longest drive bonuses on offer with his unorthodox, yet powerful, swing.

“I’m happy to raise a lot of money with the long drives,” Wolff said.

In total the event raised more than $5.5 million for COVID-19 relief and was an exciting glimpse of what we have to look forward to when the PGA Tour resumes on June 11th in Texas for the Charles Schwab Challenge.